Around 1420, a rich Belgian merchant by name of Joost Vijd commisioned an altar piece displaying the Adoration of the Mystic Lamb. The order was given to Flemish master Hubert van Eyck. After his death in 1426, the painting was finished by his famous brother Jan van Eyck. 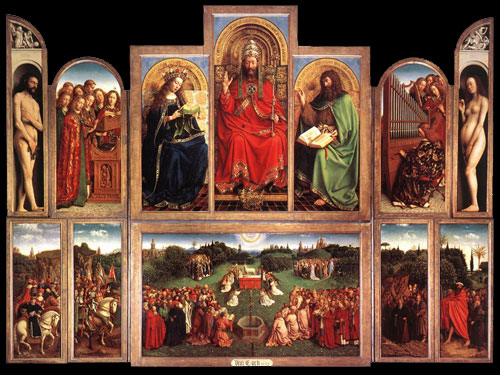 For a good description of the panel have a look at it’s wikipedia entry or here.

The relevance of this renowned work of art to the mystery of Rennes-le-Château, was introduced by Dutch author Karl Hammer-Kaatee when he published his book Satan’s Song in 2006. According to Hammer, he had merely written up the life story of a certain Tom R., a retired Dutch secret service agent who had been involved in the allied recuperation of stolen art from the nazis after World War II. Tom allegedly came to Hammer in 1990, after anonimously living in Paris for 30 years, while everybody thought he had died in a sailing accident on the Mediterrenean in 1948.

One of the pivotal topics in his book is the theft of the “Just Judges”. In April 1934, two panels of the Ghent Altar Piece where stolen from St. Bavo Cathedral in Ghent where is was on display in the Chapel of Joost Vijd, its alleged commissioner. It concerned the panel of John the Baptist and the one displaying the Just Judges. The two panels had been attached to eachother back-to-back until they were separated with a saw for an exhibition in Berlin in 1894. After the diocese had received some letters demanding a ransom, the panel with St. John the Baptist was returned a month after it had been stolen. The panel of the Just Judges has been missing ever since, even though an army of professional and amateur researchers have tried to locate it. To this day, the theft of the Just Judges and the motive for it form one of the biggest art mysteries in Europe.

The story of Satan’s Song, starts at the beginning of World War II. Research by Hammer and others demonstrates that even before the Belgian capitulation of 28th June 1940, a German lieutenant by name of Henry Koehn starts an investigation into the whereabouts of the Ghent Altar piece. He has been given an assignment from an unknown source very high up the nazi chain of command to investigate the whereabouts of the ‘gerechten Richtern’ (Just Judges). By that time, the remaining panels have been transferred to unoccupied Pau in southern France by the Belgian clergy. The Germans eventually find the Altar Piece there in August 1942, cease it and transport it

to the castle of Neuschwannstein in Bavaria. In May 1945, the panels are recovered by the Americans in the salt mines of Altaussee (Austria). Three months later, the work is returned to the St. Bavo Cathedral in Ghent where it can still be seen today. The Just Judges panel has been replaced by a copy.

The genuine interest of the nazis is demonstrated by the fact that Koehn spent no less than three years trying to find the stolen panel.

The Adoration of the Mystic Lamb is a masterpiece in every sense of the word. The Van Eyck’s were at the very forefront of painting technique. They used perspective and geometry in their paintings in a time that those techniques were in an embrionic phase and often considered secret. They also used oil in their paint, making it the first major work in oil paint, developing the technique of applying it to dizzying heights. The panels have a stunning amount of detail. One of the jewels on the panel for example. mirrors the entire chapel in which it was placed. 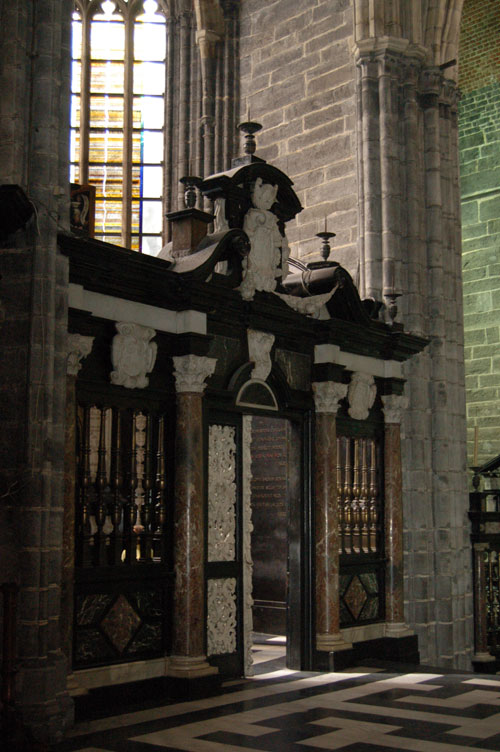 The official reading is that Joost Vijd commissioned the altar piece to celebrate the erection of his personal foundation. Such foundations were quite common at the time and would secure that enough masses would be said for the founder after his death. Vijd’s foundation was dedicated to John the Baptist. Hammer learnt, that the foundation had only be erected in 1435, three years after the work had been completed by Jan van Eyck and 11 years after he had commissioned it.

Another anomaly is that it is almost certain that the Van Eyck brothers designed the lay-out and themes of the paintings. Vijd didn’t have the background to do it. That raises a problem because in the 15th century, it was the custom that a detailed contract would be drawn up between the commisioner and the artist, certainly for bigger and expensive works. Artistic license only existed in a very limited form. In case of the Ghent Altar Piece, there was never a contract. Vijd, therefore seems to have been more the man that provided a location and who secured that this incredible piece of craftmanship would be finished by Hubert van Eyck’s brother after his death, even though Jan was travelling all over Europe and possibly further in missions for his employer Philip the Good that were described in the Duke’s administration as “a certain secret journey about which no explanation may be given”. Hubert was buried next to the panel. It would take his brother another 7 years to complete it. 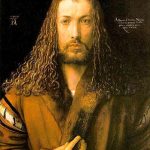 The Adoration of the Mystic Lamb is a pinnacle in 15th century art. If you pay a visit to St. Bavo’s Cathedral to examine it for yourself, even today you will be amazed by it’s composition and richness in colour, splendour and detail. It has amazing perspective and composition. It’s not hard to imagine why Hammer-Kaatee claims that the masterpiece can’t have been created for Joost Vijd and his wife alone, however rich and influential they were in Ghent at the time. No other work from anyone else at the time is so elaborate and the Vijd’s weren’t known for their extravaganza in other areas. The work is and was so impressive and ahead of its time that the brilliant Albrecht Dürer spent hours watching it in silence in 1521, kissing it’s frame when he left the chapel. Had he recognized the geometry of it?

Jan van Eyck was much more than a painter. His personal motto “Als Ich Can” (As I can) is considered to be a reference to Alchemy. At the time, alchemists were physicists, looking for the working of God in earthly things. 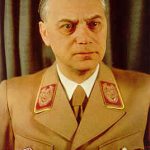 In 1456, Facius, an Italian historian wrote that Van Eyck had drawn a map of the world which was perfect, displaying the continents and on which distances could be measured. This is also where we find ourselves back in Satan’s Song. After a lot of research into the archives of Henry Koehn and interviewing nazi party ideologist Alfred Rosenberg before his trial in Neurenberg Tom R. learns a staggering truth. A group called the Allahists had hidden the Arma Christi. These Arma Christi are the instruments used during the passion of Christ. There is among other things the Crown of Thorns and the Nails of the Cross. Jan van Eyck was a member of this group and has used his skills as an artist to code the hiding place into his masterpiece, the key being in the Just Judges. Tom R., who claims not to be too interested himself is than summoned by the OSS (the predecessor of the CIA) to trace the Arma Christi and deliver them to the Americans. The quest leads him to Rennes-le-Château and eventually to the Sanctuary of Notre-Dame de Marceille in Limoux.

The book ends after a group called the ‘Ebionites’ shows the Arma Christi to Tom R. in 1974.

The “logo” of the Ebionites is a circle with a palm leaf. They also use the Tau cross. Hammer was given a wooden Tau cross with the Ebionites emblem on it, that he wears on several photos. 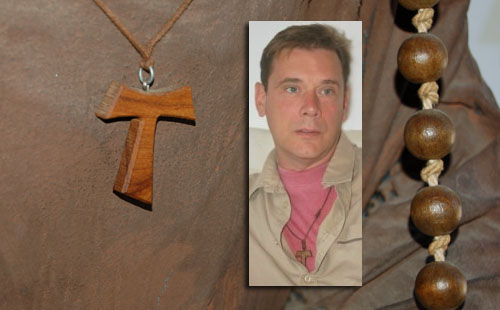 In the last couple of years, the original Adoration of the Mystic Lamb has been on display in a well guarded chapel inside St. Bavo’s cathedral in Ghent. The painting is not only guarded by the people sitting in the ticket boots. Both at the left and right of the door are quite eery paintings of Christ nailed to a Tau-cross. In at least one of them he is bleeding from his wrists into two chalices. The other one is in such a bad state that it is distinguishable that there is a Tau-cross and his wrists are bleeding but little else. 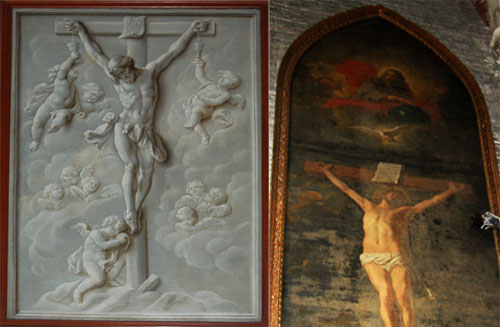 In the same corner, the 14 beautiful stations of the cross are adorned by murals of angels holding all the Arma Christi, ranging from the ladder to the nails and Crown of Thorns. In the stations themselves too, there is a prominent role for the instruments. 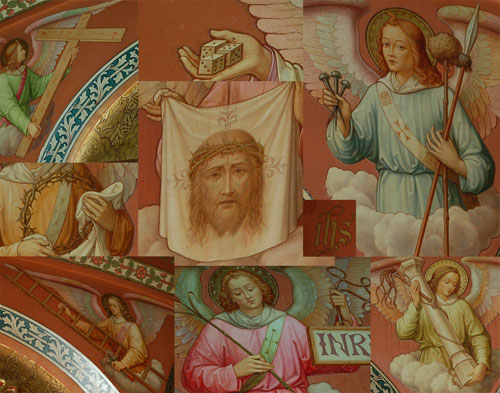 Arma Christi murals surrounding the Stations of the Cross in St. Bavo

All this is located within 10 metres of the Van Eyck masterpiece. It gives the strong impression that a movement using the Tau-cross is both spiritually and physically guarding the Adoration of the Mystic Lamb to this very day.