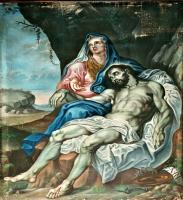 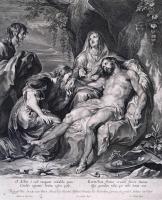 Named after the trompe d’oeuil of an hare in the right knee of Christ. It is said a spider is hidden in the clouds representing the immediate region (Ã  Régnes, an old name for the area or ‘araigne‘, ‘spider‘). The Lièvre (Hare) is said to represent Louis XIV (who’s most important advisor was Thomas le Lièvre, Marquis de la Grange) or Louis XIV in combination with Nicolas Fouquet, who were portrayed as the Turtle and the Hare in the famous fable by De La Fontaine from 1668. Painted (copied) by Abbé Henri Gasq, Curé of Notre Dame de Marceille between 1856 and 1862 after Paulus Pontius’ engraving of,  La Lamentation by Van Dijck. Read more here