The Dalle de Coumesourde, or simply Coumesourde Stone, is a strange beast. It is a stone with an inscription that a certain Ernest Cros found in 1928 near the hill that gave the stone its name. Mr Cros, besides being an enthusiastic amateur-archaeologist, is said to have been good friends with Bérenger Saunière. He had long been interested in the Aude’s history and settled in the Rennes-le-Château area in 1924 in the village of Ginoles. Being a bit of a stickler for detail he meticulously recorded much of his research and findings in a document with the poetical name: ‘Researches of M. chief engineer Ernest Cros, undertaken in de high valley of the Aude, particularly during the years 1920-43’. With a title like that you can imagine what a joy-to-read the fruits of his labour must have been. In good Rennes-le-Château fashion, all of Cros’ records and documents got lost in a burglary in 1960 and now only a typewritten copy of the report is said to have survived. The stone has been depicted in four variations in four publications: 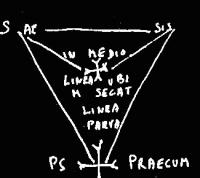 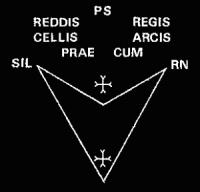 As with so many things in the Saunière puzzle book, we know of the stone from Gérard de Sède who published about it in 1967 in his book Le Trésor Maudit de Rennes-le-Château. In his book however, the drawing of the stone was stylized and the letters S and AE were more clearly combined to make one the word ‘SAE’. In the eyes of many a researcher the Coumesourde stone is a tad less suspicious than most of the other puzzles in the Rennes-le-Château enigma since at least it wasn’t in Les Dossiers Secrets. However, its discovery and reliability aren’t exactly undisputed. There is for example the fact that some of its text is identical to the inscription on the horizontal Tombstone of Marie de Negri d’Ables. That stone WAS in the dossiers (engraved stones of the Languedoc by Eugène Stublein, registered in the Bibliothèque Nationale de France in June 1966). The Dalle de Coumesourde is believed to be an important clue in the enigma. It features in many of the standard works on Rennes-le-Château. A plausible and conclusive explanation of its true relevance has never been given. Countless men and women spent countless hours counting the letters, measuring the angles and mapping its triangle on countless maps, parchments and paintings.

In October 2007 it was reported that the original stone had been found back by a group of Spanish researchers. Société Perillos produced an article series in that month about the history of the stone and the remarkable new discovery.