In 1906, Saunière started construction of the Tour Magdala. The word ‘Magdala’ carries an appropriate double meaning. The gospels mention a village called Magdala in Galilee as the birthplace of Mary Magdalene. In Aramaic, the native tongue of Jesus, the word Magdala means ‘tower’ or ‘fortress’ (Migdal in Hebrew). On the original plans for the tower that Saunière made, he called the tower ‘Tour d’Horloge’. We see an entry in Saunière’s journal on June 13, the feast day of St. Antoine de Padoue: “…pose de la première pierre de la Tour de l’Horloge“. Some say the Tour Magdala looks like a Knight’s tower on a chessboard that needs to be moved in a straight line horizontally or vertically.

The Tour Magdala is a neo-gothic tower that sits on the far west corner of Saunière’s estate. If you climb the narrow spiral staircase to the top of this strange building an exit the little tower (échauguette) on the top deck, you are rewarded with an incredibly wide view of the surrounding countryside. It is hard to capture it here in photos or mere words. Many of the places that play a part in the enigma and legends of treasure are visible.

The Tour Magdala served as Saunière’s personal study and library and as such replaced the, reposoir after it’s completion in 1906. The wooden housing for his books on the ground floor was made to measure and took a month to complete. In 1907 he seriously started collecting stamps, postcards and books. He sent all his correspondents little metal boxes and asked them to fill them with stamps and send them back to him.

From 1908 onwards, Saunière directed his attention fully to his vast collection of books. To create order in the stacks of papers, magazines, pamphlets and books, he hired Henri Baret a librarian from Castelnaudary, who stayed with him for three months.

Invoice of Barret, the librarian that helped Saunière to sort out his massive library

No receipts or records survive of the collections of books and stamps. Most were sold or given away by Marie Dénarnaud after Saunière’s death and we know very little of their content. When the Derain-Raclet bookshop in Lyon went bankrupt around 1950, three books were found that were marked ‘François Béranger Saunière, Priest at: Aude, town of Rennes.’ These works were entitled: ‘the Prophecy of the Popes allotted to St. Malachy’ by Abbé Joseph Maitre, 2) ‘History of the Large Forests of Gaule and Old France’ by L.F. Alfred Maury and 3) “Celtic Monuments, or Research on the Worship of the Stones, Preceded by a note on the Celts and Druids, and followed Celtic etymologies’ by Mr. Camby.

Although the Tour Magdala doesn’t appear to be an illustrated treasure map like the church, there are some peculiarities about it. In the last tile, in the extreme west corner of the floor there is a red dot. Though many will argue it’s just a fault in the tile, it does point up to the staircase to the window that points straight into the direction of a ancient grotto, about a mile in the distance called ‘Grotte du Fournet, dite de la Magdeleine’, which translates as ‘The Burial Site of, the Magdalene’.

The spiral staircase inside the tower has 22 steps, 22nd July being the feast day of Mary Magdalene. Andrew Gough has an article about this feature.

There is a little chimney on the roof of the tower, connected to the stove at ground level. The exhaust is beautifully modeled in a traditional opening representing the holy trinity. In a straight line through the holy trinity of the chimney lies the mountaintop of Pech Cerda. 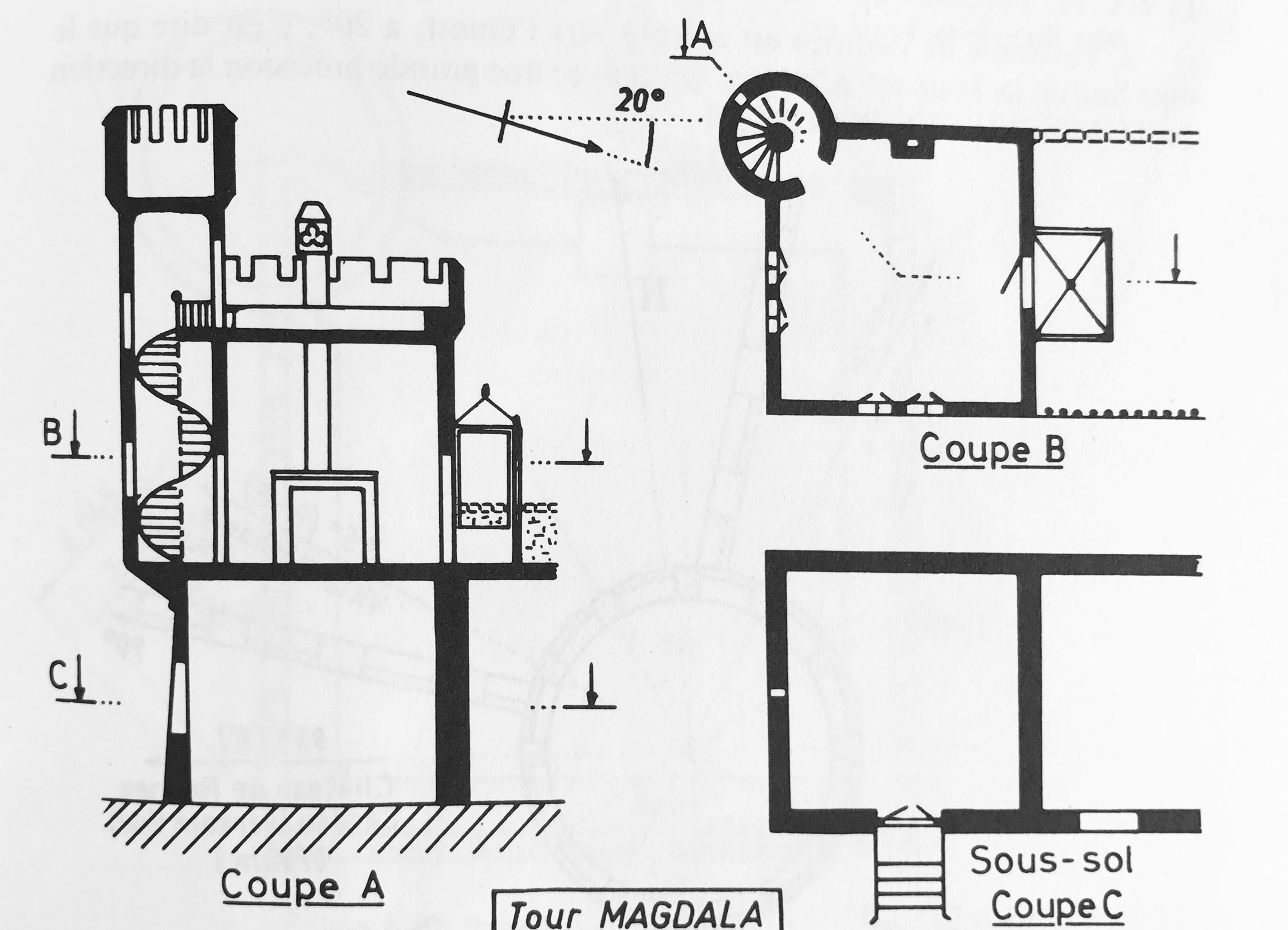 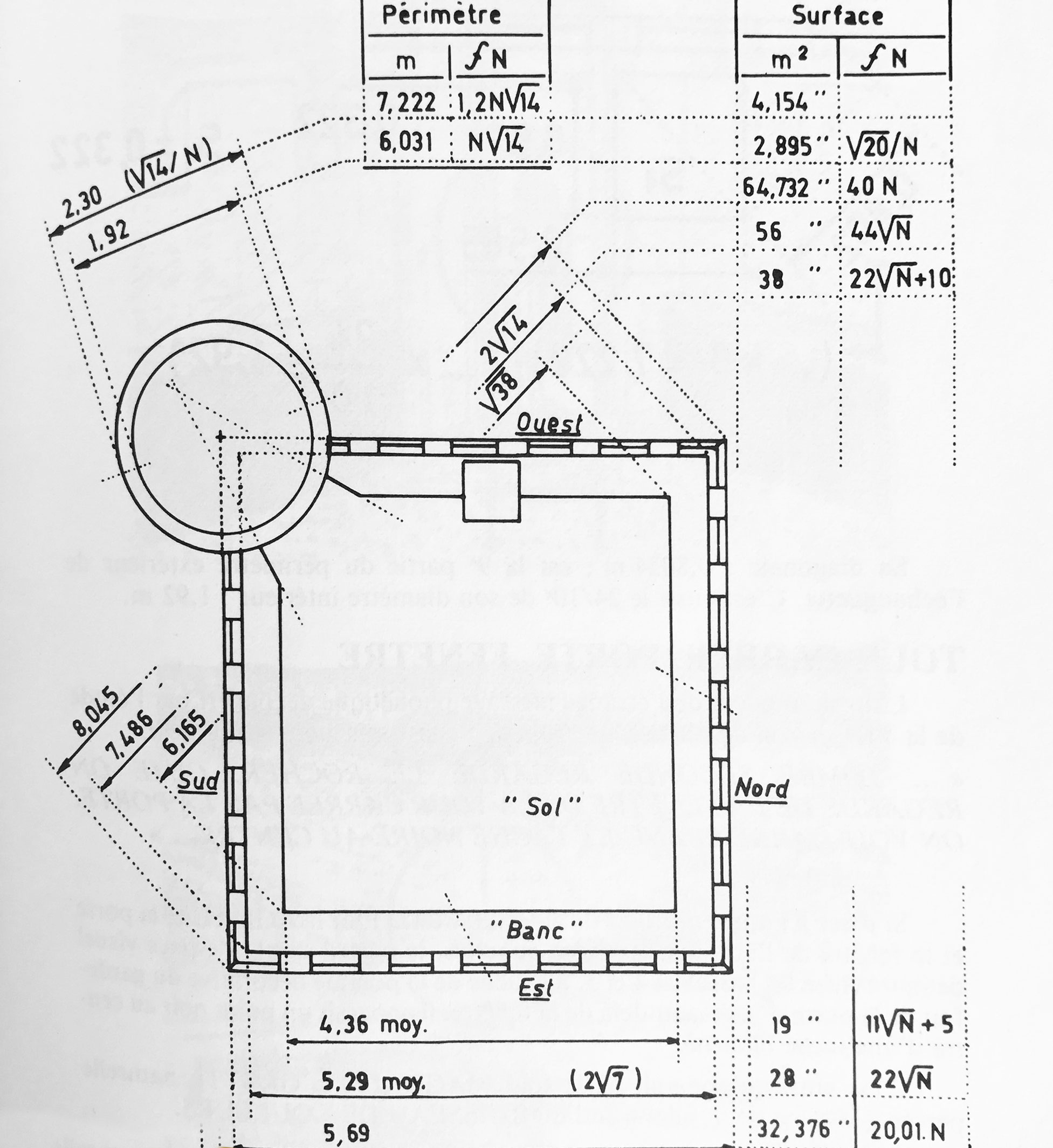 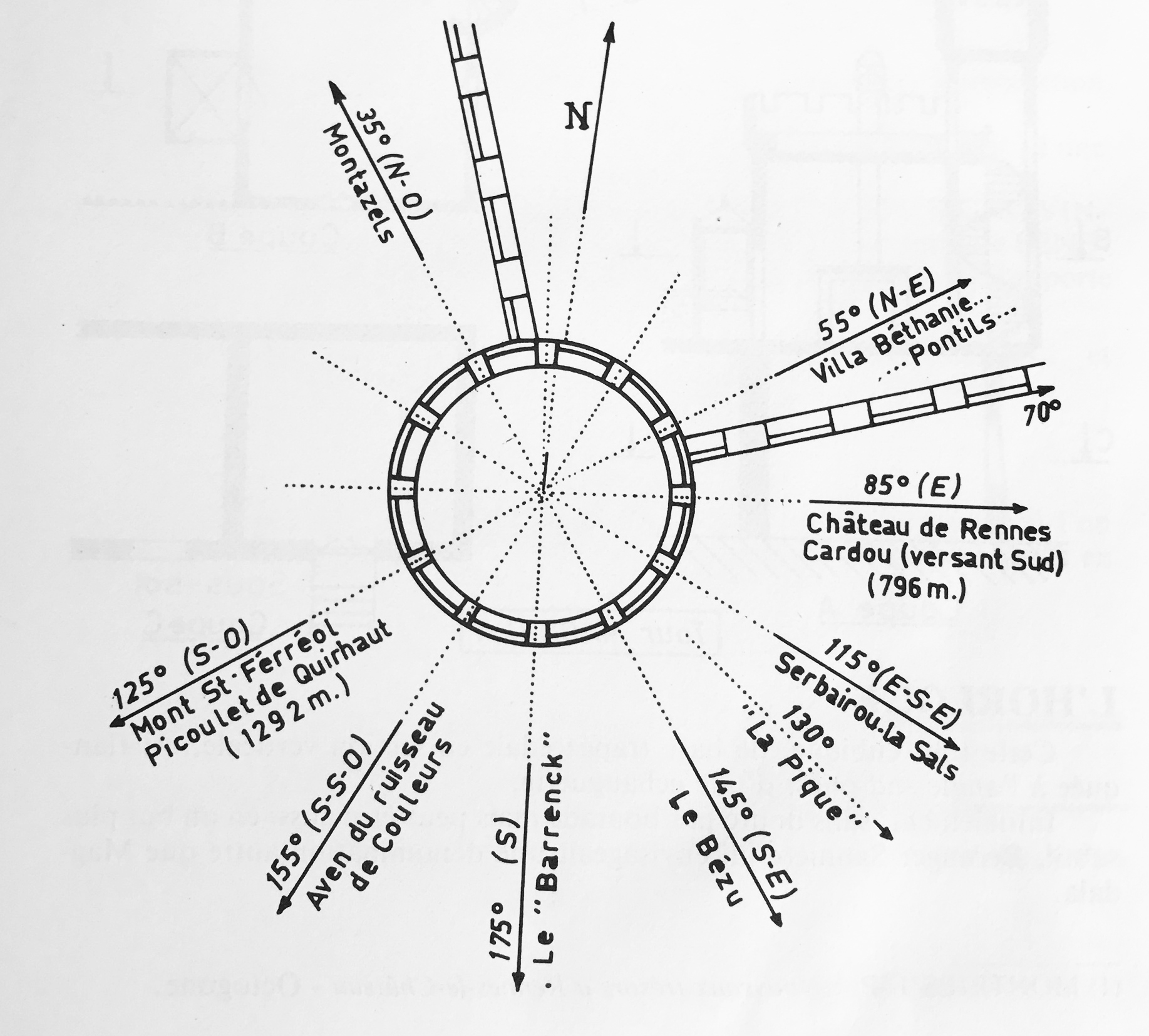 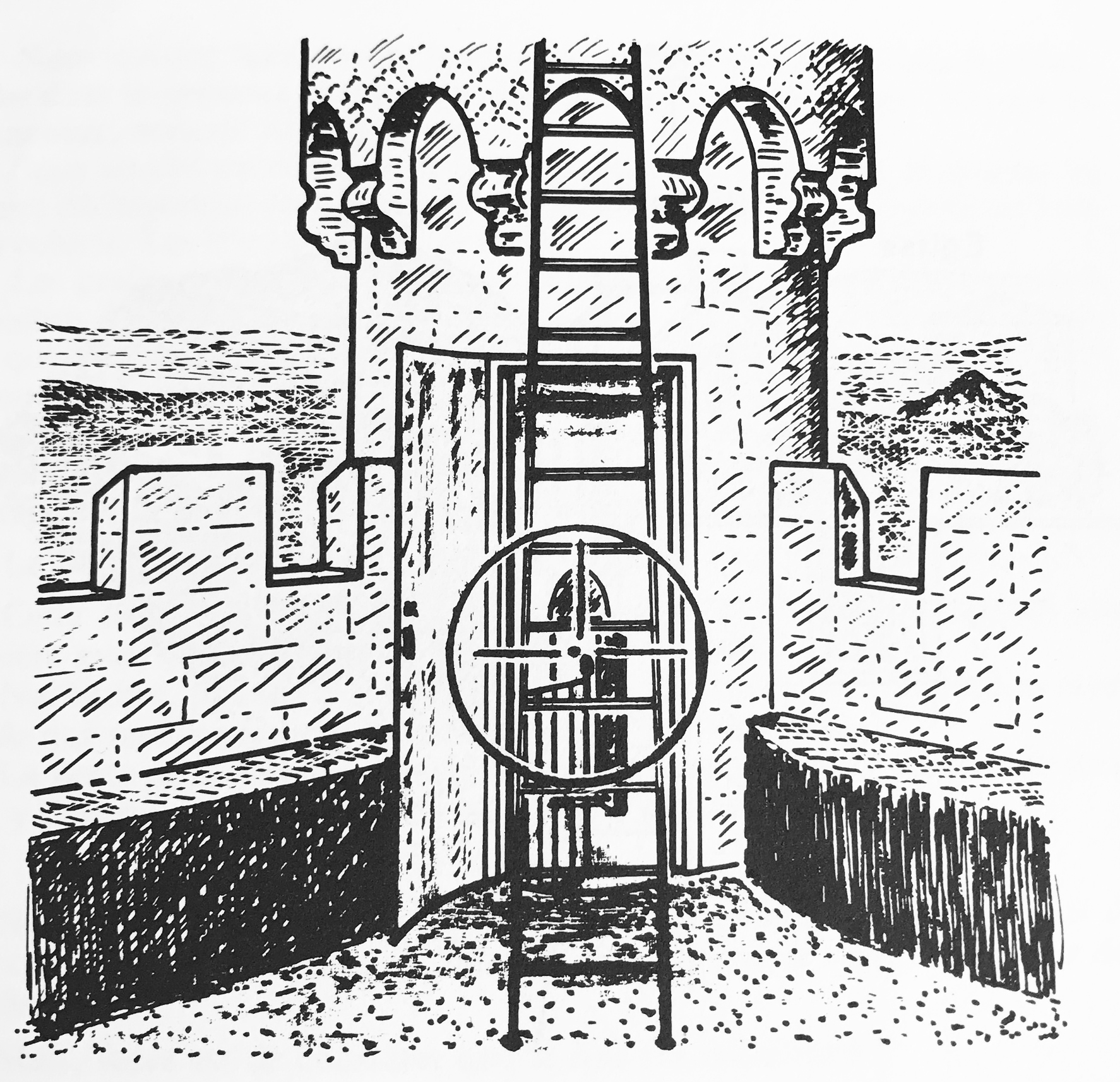 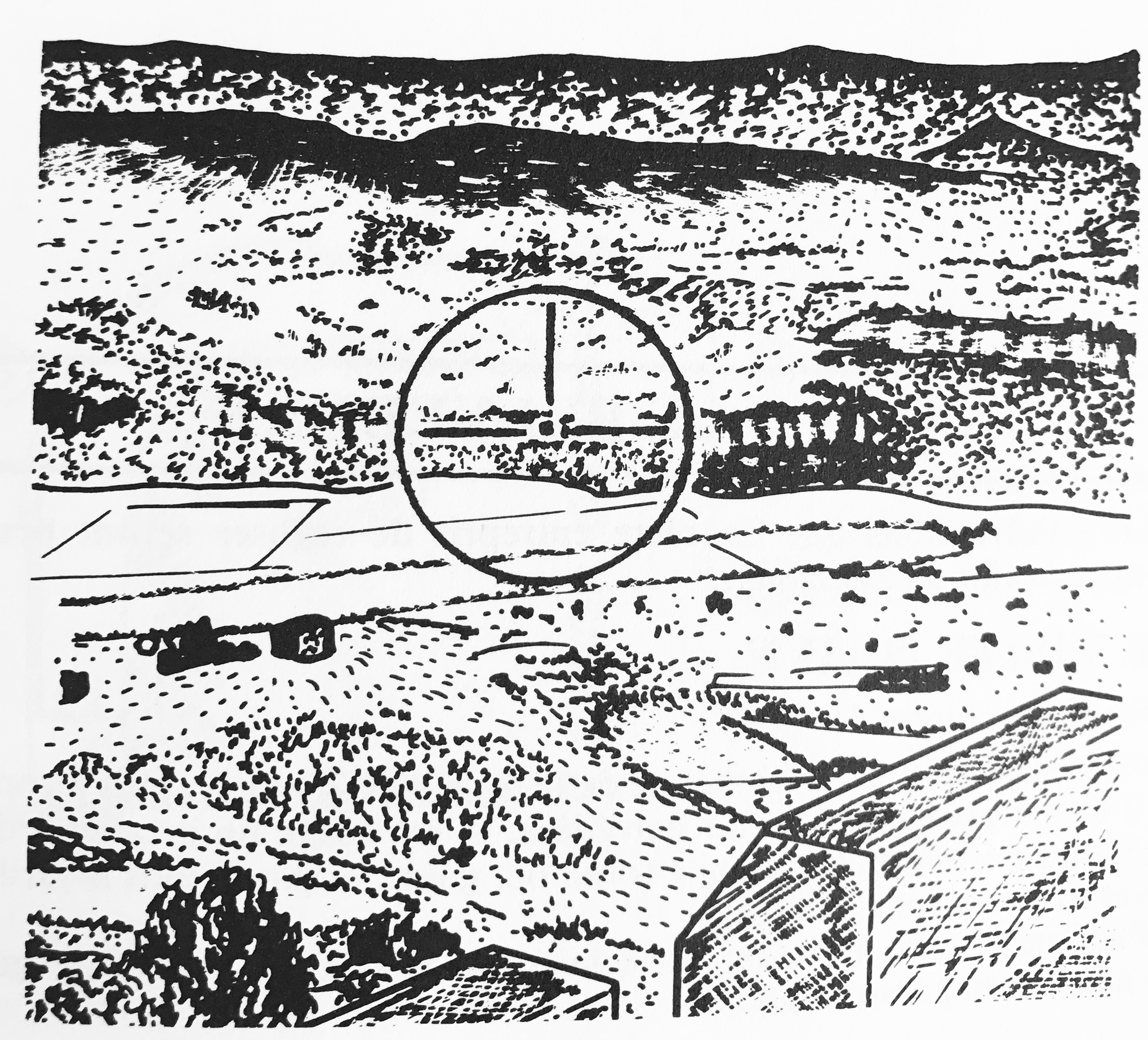