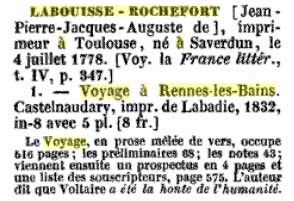 Jean Pierre Jacques Auguste de Labouïsse-Rochefort was born in Saverdun (Ariège) on 4th July 1778 and died in Castelnaudery (Aude) on 22nd February 1852. He was a French historian. In 1832 he published a book entitled ‘Voyage à  Rennes-les-Bains’ in which he described a treasure, guarded by the devil close to the Château de Blanchefort. According to the locals, he recounts, it concerned nineteen and a half million pieces of gold.

Once a nice sunny day, the devil put the gold on display where it was spotted by a young sheperdess who lived close to the site. When she returned with her parents, the treasure had disappeared. A sorcerer was called in for help. The sourcerer tells the villagers he is prepared to help if he gets half of the treasure and the help of the villagers in catching the devil.

The sorcerer went on a search for the devil. When the villagers heared a great noise they got afraid and fled. The sorcerer left for Limoux, disappointed and angry.

Labouisse-Rochefort then describes that the Marquis de Fleury, who owned the ruins of Blanchefort, threatened to sue the villagers for violating his terrains, linking this tale to actual facts.

Labouisse-Rochefort ends with a little poem about the treasure:

Labouisse-Rochefort’s description of this local legend demonstrated that the historical roots of the Mystery of Rennes-le-Château are much older than the story of Abbé Saunière. There was talk of a local treasure long before he surfaced.

Noel Corbu was clearly inspired by this book. In the tape recording he made to entertain the guests of his hotel he too spoke of nineteen-and-a-half million pieces of gold.