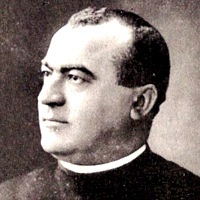 Brother and close friend of Abbé Bérenger Saunière. His role in the play is unclear. He became a vicar in the village of Alzonne on July 1st 1878 to join the Jesuits a year later. Being a Jesuit he worked as a teacher in Narbonne and later private tutor to the family of the Marquis the Chefdebien, grandson of the founder of the Philadelphes Masonic Lodge. He was sent away after accusations of theft in 1903. He was excommunicated by the church in 1904 and died an alcoholic a year later. After his death, a son was born from his relation with Marie-Emilie Salière, who lived with his uncle Bérenger for a while.