The story of Daniel Bettex is, interwoven with the mountain of Bugarach. Bettex, was a Swiss security officer at Geneva airport during his professional life. In his free time he researched the Medieval Cathar tragedy. Bettex was in close contact with the Societé du Souvenir et des Etudes Cathares, the French Society of Cathar Research. His correspondence with Déodat Roché, the founder of the society, in whose former house in Arques it now has a museum, led him to a number of locations in and near mount Bugarach. Roché (who was related to the Dr. Roché that supplied Saunière with fake medical statements so he wouldn’t have to show up in court), stated that few had yet researched the mountain and felt it was time someone took up the glove. Bettex started his research aided by Lucienne Julien secretary of the society.

Starting point was the document mémoire sur la mythologie appliquée au Pech de Thauze (memory of the mythology of the Pech the Thauze, the old name for Bugarach). This document, beheld an overview of the legends and mythical writings about Bugarach from original 15th century sources. Many of the legends, like the story of Agartha, dealt with an underground entrance or cave system of some sort. Bettex decided to start looking for an entrance to the underground mythical world. In his notes he speaks of the tradition of a hidden opening, leading to a waterway with a quay. From this quay you would be able to travel deeper into the mountain.

Many writers, among whom some quite illustrous ones have written about Bugarach and an underground world beneath. Maurice Leblanc, Gaston Leroux, George Sand, André Malraux, Louis Fédié, Henri Boudet, Daniel Réju, Serge Hutin, Luc Alberny, Jules Verne, to quote just a number of a much longer list. Verne, in his book Clovis Dardentor, talked about a secret entrance that led to an underground world were a mythical race lived. Bettex was intrigued by the many similarities in the stories old and new by authors, many of whom were members of secret rosicrucianist societies. 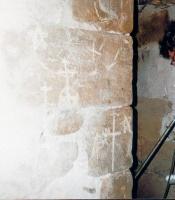 Bettex never disclosed where exactly he did his research. Allegedly as a pretense to gather the necessary equipment he excavated the old castle of Bugarach. After his death, the floors of the castle in Bugarach were filled with rumble and sealed with concrete. He appears to have found cavities in the mountain in which he found graffiti of what he claimed was the Ark of the Covenant on a sled. Bettex made lifesize reproductions of these. The photographs and notes he made have survived. It was actually whispered that Bettex had located he Ark and had been called by the Israelian general Moshe Dayan who warned him for its powers.

In his correspondence with Julien he claimed he would soon make a fabulous discovery. The only thing we know for fact is that he indicated to Julien that he thought that there was a connection between the inexplicable graffiti, the remains of a hearth and the beginning of a mining installation whose collapse had appeared to be done intentionally.

In 1988 Bettex, who was normally a calm and composed man, was all excited and told Lucienne he was almost at the end of his search. At most, four or five days separated him from the final goal. He told he’d be back within a week, carrying part of a treasure. He told her “You will be immensely rich!”.

Three days later he was found dead inside or close to the mountain. It is unknow where exactly he was found or what the cause was. Some say he died in a collapsed gallery in the mountain, others say he managed to crawl back to the village where he died of a heart attack. There is one story that says someone found his dehydrated body near the mountain. Another one claims he returned to Switzerland where he died peacfully a few years later.