During his life, Saunière recorded much of his spending in his account books.

These are truly staggering amounts. An account clerk would earn 127 gold francs per month. Saunière spent 6,000 gold francs per month, almost 50 times as much. Mind you, these are his recorded spendings. Saunière didn’t record everything he spent. There are structures in the village and on his estate like the big cistern under his reposoir that he had built and for which there are no contracts and no receipts. The priest never recorded travel or personal expenses. His visitors and correspondents attested to the fact that the priest had enormous collections of valuable books, magazines, newspapers, stamps, postcards and furniture most of which was never found back in any of his surviving account books (and we know that some account books are missing too). We do find some receipts for books but not in the expected quantities. So Saunière spent a lot more than this 695,151 gold francs he recorded. The list is endless. We’ll probably never know how much he spent in total. 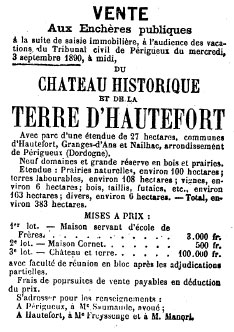 In front of the ecclesiastical court in 1911 Saunière claimed to have spent 193,000 francs restoring and refurbishing his estate. Some of the amounts are enormous. The calvaire he writes costed him 11,200 gold francs. Early 1900 a luxury car would cost just 8,000 gold francs. How much 90,000 gold francs for the Villa Bethania is becomes clear when you know that in 1890 the Château the Hautefort was sold for 100,000 gold francs, including 383 hectares of land.

Many believe Saunière financed his lavish lifestyle and building projects by committing simony also called mass trafficking. Mass trafficking was a well known practice among priests at the time. In principle it wasn’t illegal. Priests would receive money from the faithful for saying masses. It often happened that the priest received the money but never did the work for it. If a priest would receive requests for more than 3 masses a day it would become suspect. By ruling od the diocese the surplus would have to be paid to the bishopric. A request to say a mass would cost 0.5 gold francs increasing up to 1.5 francs by the end of Saunière’s life.

There’s no doubt whatsoever Saunière was guilty of the practice of Mass trafficking. He kept meticulous records about it that can be found back in his accounting books from 1895 to 1915. These books are in the possession of Antoine Captier and Laurent Buchholtzer.

Ironically, Bishop de Beauséjour, who persecuted Saunière to unvail the sources of his income confided to his good friend the Count of Fondi-de-Niort that he didn’t believe Mass trafficking wasn’t in play here. De bishop would spend a month every year in the Count’s château at Niort-de-Sault. The very same château in which Marie de Nègre was born.

Being the well organized man that he was the Abbé used ordinary directories to find addresses to send out requests for money to say mass. He would start at ‘A’, working his way down the alphabet. It’s well known that he spent a small fortune on postage and that the local post office in Quillan was kept quite busy by him. From his own records we can see that Saunière received requests to say no less than 110,000 masses for which he was sent 100,000 to 125,000 francs in the post. The amount was a fortune by all standards in those days. At the same time it can no means account for all of his excessive spending. Less than 20% of Saunière’s income came from mass traficking. Where he got the rest is the core of the Mystery of Rennes-le-Château.

When the priest died he left all his possession to his aide Marie Dénarnaud. He didn’t leave any debts.

Where did it all the money come from 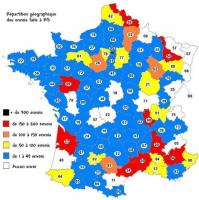 As intriguing as the amount is where all the mass trafficking money came from. From the records it shows that the gold francs rained in from all over France. Curiously enough, although hords of researchers have been looking for it for a long time, no-one has ever found an advert in any magazine of paper from Saunière in which he requests money to say mass. Nor has there been found one written request to any of his benefactors.

Saunière received money from neighboring priests. For example Sarda, the Chaplain of Rennes-les-Bains (where Henri Boudet was the priest) donated almost 1,500 francs to Saunière between 1899 and 1902. The money also came from convents and monasteries from all over France. It included places like Chartres and Lourdes. Not the places you would think need a mass said by the priest of a tiny dusty village on a far away hilltop in the Languedoc.

Jerôme Choloux has counted the known, requests for masses Saunière received and plotted them on the map of France. Most come from Paris with over 300 requests. The rest comes from all over France. Perhaps it is here we have the real enigma of Rennes-le-Château.

Bérenger Saunière had several other sources of income.

When Saunière was asked to account for his expenditure during the trials of 1910 and 1911 he reported having received 82,800 francs in gifts between 1885 and 1905 from a number of benefactors, many of which anonymous. It included 30,000 francs through his brother Alfred. The gifts cannot be traced or evidenced.

The priest placed six locked collection boxes in his church in 1897 and a big one in 1898 made of oak wood. These 7 boxes generated a steady stream of income. According to the priest, he collected 1,200 francs per year. He didn’t keep any notes of the income from these collections so it’s impossible to validate this amount. From the amounts collected in comparable French villages it’s more likely he received 500 to 600 francs per year from the collections.

When the construction of his domain was finished Saunière had 33 postcards made that he sold to visitors of the domain. The proceeds from these sales where never recorded.

The priest made a hobby out of restoring furniture and selling it. Again no records survive.

Saunière gave paid lectures about the history of the region. No records exist.

According to some French researchers that live closest to what is left of the original sources, the French police did some investigation after the priest’s death. Allegedly the report they produced spoke of trafficking gold with Spain.