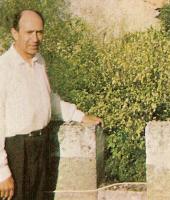 Entrepeneur, Noel Corbu bought Saunière’s property, from Marie Dénarnaud in 1945 after which she lived with the Corbu’s for until her death in 1953. When Noel failed to find even a trace of treasure he transformed Villa Bethania into Hotel du Tour. To attract guests, he convinced journalist Albert Salomon to, publish the story of Saunière in 1956 in local newspaper La Depêche du Midi in three frontpage articles on three consecutive days in January. It didn’t fail to attract

attention. From that moment on, a steady stream of treasure hunters started to frequent the village and left their marks everywhere. In 1965, after one of the treasure hunters nearly blew up half the village he sold the lot to Henry Buthion and the Corbu’s left Rennes-le-Château.

Noel Corbu died in a horrific car-accident 3 years later. The accident happened on the roundabout straight, in front of, the Monastery of Prouilhe.

Listen to this unique French radio recording in which hosts Robert Charroux and Robert Arnault discuss the Mystery of Rennes-le-Château with Corbu on national radio in 1962.

Update Required
To play the media you will need to either update your browser to a recent version or update your Flash plugin.