Also called Château d’Albedun or Albezun. This ruined castle on the 823 metre summit overlooking the village of St. Just-et-le-Bézu is part of the giant pentacle that Brithish author and researcher Henry Lincoln described in his book the Holy Place. The other points of the pentacle are the Château de Blanchefort, Rennes-le-Château and the hilltops of la Soulane and Terre de Lauzet. 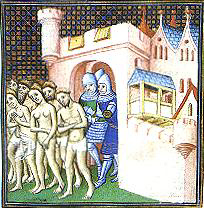 From the 11th till the 13th century the Château was home to the Lords of Albedun. In 1151, Bernard I Sermon of Albedun joined the Knights Templar. His family donated substantial sums to the order. During the Albigensean Crusade, the Sermons embraced the Cathar faith. Bernard II Sermon offered his castle to Simon de Montfort but for an unknown reason, De Montfort allowed the Sermons to keep their residence. He took advantage of this very rare privilege by hiding the Cathar bishop Guilhabert de Castres and Parfait Guillaume Bernard Hunaud from 1229. For this reason, the French King gave the castle to Pierre de Voisins in 1231, who was also the new owner of the Château of Blanchefort and the Château Hautpoul in Rennes-le-Château.

There are some intriguing things going on with the Sermon family. While all other nobles of Cathar faith where ruthlessly prosecuted and executed by the French, the Lords of Albedun kept most of their privileges and their lives. They also never had to borrow a penny from anyone but financed the Counts of Carcassonne and donated enormous amounts of money to the Knights Templar. It is unclear where all this money came from.

In 1307 the castle was inhabited by Othon d’Aure, vassal to the count, who was accused of counterfeiting money by agents of the French King Charles V. In 1344 when members of the Voisins family inhabited the Château, Brunissende who was Jacques de Voisins spouse and her brother in law and nephew of Pope Benedict XII Guillaume de Cathala were accused of the same thing. The accusation was not that they produced fake money without precious metal but rather proper but unauthorized golden coins. Here too it was unclear where all the gold came from.

In his book Rennes-le-Château et l’énigme de l’or maudit, French veteran author and researcher Jean Markale claims that the Templars inhabiting the Château de Bézu were the only ones not arrested on the notorious Friday 13th October 1307. In contrast to all other Templars in France they reported to the Counts of Barcelona.

According to a local legend, the well in a farmhouse in the nearby hamlet of Baruteaux contains a silver bell that rings every year in the night from 12th to 13th October. The ringing marks the start of a procession of Ghosts that walk from the cemetery to the Château de Bézu.