In the back of the church, behind the statue of St. Antoine de Padoue there is a door leading to the Sacristie of the Eglise Marie-Madeleine. Inside the small room is large wood paneled wardrobe where Abbé Saunière kept his chasubles for the mass. There is a simple bare wooden floor. In the recess behind the first door of the closet there is a mirror with a text over it:

“Give virtue to my hands, O Lord, that being cleansed from all stain I might serve you with purity of mind and body.” It was put there by Saunière.

The most, beautiful feature of the Sacristie is the stained glass window that is considered to be one of the most beautiful features of the entire church. Since the Sacristie is closed to the public, few have personally seen this masterfully crafted window. It depicts Jesus on the cross with Mary Magdalene praying at his feet., She is not praying to the lord but clearly looking in the direction of Mary who is standing on his left. There is a third figure on the right but is not immediately clear who that is. He is a young man that is not carrying any symbols that we can easily identify him with. It could be Joseph of Arimathea but it cannot be established with any certainty. Jesus and Mary Magdalene have red hair which is quite unusual. The window was made by Henri Fleur of Bordeaux in 1896. His signature is clearly visible on a stone in the left corner. Finally, a number of roman numbers are depicted that have let to many a treasure seeker calculating clues.

In the wood paneling of the wardrobe is a secret wooden door that leads to the ‘isoloir’, the small half-circle shaped outcropping that is more obviously visible on the outside than on the inside. It is a very small and simple room without the beautiful finishings that are so typical of the rest of the church. There’s an unconfirmed story that once, an anchoress lived in this little outcropping. Anchoresses were saintly figures living a lonely existence in these kinds of recluses. The best know is probably Hildegard von Bingen. Who the anchoress was and if she indeed ever was is another mystery.

In the solitary, there is no lighting, the floor is the natural rock just like outside. Furthermore the floor of the secret room is not leveled out with the Sacristie. There is a very small window that lets hardly any light in and very little ventilation. Saunière apparently used it as a library. It makes you wonder what he put in this room, concealed behind two doors in a private part of his church.

Architect Paul Saussez has demonstrated that this little room was most probably built over one of the entries to the crypt below. 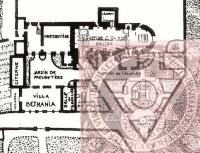 If Saunière’s ex-libris is superimposed over the garden, the cross points to this secret room as described by Klaas van Urk in his book The Holy Grail and the Ark of the Covenant.