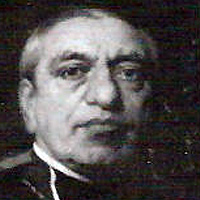 Successor of Mgr. Billard from 1902 until his death in 1930. De Beauséjour insisted on Saunière to uncover the sources of his wealth and when he kept refusing to do so accused him of trafficking in masses. Even though the Abbé could never have amassed the money he spent with selling fake masses alone, the Vatican convicted him twice and forbade him to carry out his priesthood, only to be re-instated ‘in articulo mortis‘ (at his death).