On the western wall of the Church of Saint Mary Magdalene, Saunière had an enormous fresco installed. It’s colorfulness and richness adds much to the character of the church that has been described by many a researcher as gaudy or kitsch. The fresco is positioned over the confessional.

The Fresco was placed there in 1897 together with the statues of Asmodeus, the Saints and the Stations of the Cross. What Saunière depicted here has been subject of endless debate. Among the candidates are Puivert (Jacques Rivière), the surroundings of Rennes-le-Château (Pierre Jarnac) and, Rennes-les-Bains (Ben Hammott).

Originally the western wall, hosted the main entrance of the church. Over it there, used tobe, gallery for the town dignitaries where they could attend the mass. At some moment in history, the original access to the church was sealed and the current one was installed. Why this was done is unknown. There are some examples in France of church entrances being sealed off after an important wedding of a royal visit around the 16th and 17th century. Jean-Luc Robin has suggested a royal burial took place in the church, indicated by a ring of special brickwork around the church. Perhaps there’s a relation there.

Below the scene it reads VENEZ À MOI, VOUS TOUS QUI SOUFFREZ ET QUI ÊTES ACCABLES, ET JE VOUS SOULAGERAI (come to me, all who suffer, and I will relieve your pain). This is not a bible quote but a sentence from a sermon by Bernard of Clairveaux, Dialogue d’un juste avec Dieu (dialogue of a rigtheous man with God). De Clairveaux, was one of the main forces behind the Second Crusade. The text is inspired by the gospel of Matthew 11:28 Come to me, all you who are weary and burdened, and I will give you rest.

The painter made a number of mistakes in the writing that he covered up. The word ‘VENEZ’ was moved around and it appears that at the end the original word was ‘SOULAGERAS’. The dot at the end of the line seems to be placed too far from the sentence.

The Bas Relief shows a landscape with plants and trees, rocks, hills, mountains and some buildings. At the right we see a bent figure an the top of a pillar. In the middle there’s a rocky mountain carrying Christ surrounded by 11 people that appear to be worshipping him. At the foot of the mountain lies a sack. 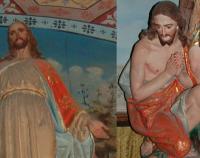 Christ is wearing a red cloak with golden stitchings, a sign of his worldly rule. It is unusual to see him depicted like this but Saunière does it twice. On the statue of John the Baptist and Jesus at the right of this fresco Jesus is wearing the same cloak. A number of royal houses know the Sacrae Coronae Regni, red cloak of royal power even today.

The group of people around him consists of 4 women, 4 children and 3 men. It’s been suggested that the two devotely praying little boys on the left are Saunière and his brother Alfred. At the right, St Mary Magdalene sits crying at Jesus’ feet. Pierre Jarnac has suggested that the scene is about St. Germaine’s, Miracle of the Roses. A bag of bread changes into roses. Additionally Saunière would have meant to honor the Lords of Fleury with the roses. The mountain is an allegory of blissfulness. Whatever Saunière’s intentions were, the scene does breath the, sermons and miracles of Jesus as told by Matthew. It could well be a scene from the Sermon on the Mount where Jesus is surrounded by those on who he performed miracles. The lame, the blind, the bleeding woman, the woman with child, the man with the disfigured hand, perhaps even the adulterous wife that went into history as St. Mary Magdalene. The woman holding Jesus after his resurrection. The entire gospel in one scene.

Jesus looks slightly to the left. Perhaps that is significant, it’s known that, Saunière had the head repositioned from looking straight ahead. He now looks at the statue of St. Mary Magdalene or perhaps even at his own Calvaire in the garden outside. His hands point down suggesting a triangle. 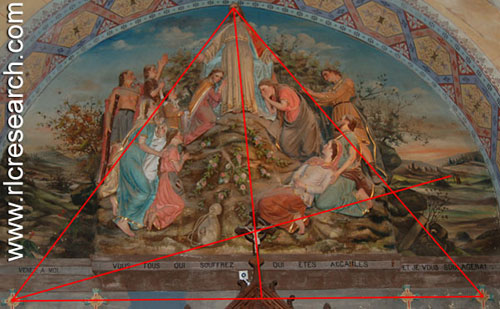 Combined with bent figure on the right who appears to be heading for something, the celtic cross on top of the confessional and the fours stations on one line, on both sides of it, the suggestion of a triangular shape seems very obvious. It reminds strongly of the design on the Stone of Coumesourde. It’s no wonder many believe it is in this very fresco Saunière hid his most important clues to the location of the discoveries he made. The Bas Relief is an almost literal copy of a drawing by A. Dietrich as you can read here.

The landscapes on the side 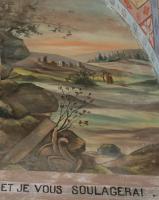 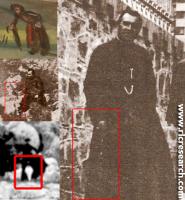 Where the group of figures is clearly a work inspired by an example; the lateral frescos are original works and therefore worth having a closer look at. I have no doubt the bent figure on the right,, leaning on his umbrella and carrying a document is Saunière himself. He is dressed in his typical priestly robe, wears his usual hat and he has his inseparable umbrella with him he always carried with him on his journeys as attested by many of the photos that survive.

In the photographs you can see Saunière with umbrella in front of the Villa Bethania in 1901 (left), at the Roches Tremblantes with a white umbrella (photographed by Henri Boudet according to Pierre Jarnac) and at the falls of Saoutadou from his own collection of 33 postcards. 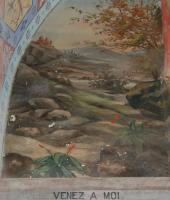 The capital of the column or pillar lying at the bottom of the scene bears a striking resemblance to the wooden baluster in which Saunière allegedly did his discovery as described in this article on Société Perillos.

On the left a bunch of lillies is growing in the desert. In its biblical sense this signals the return of the royal bloodline. In the far left corner lies a stone. Ben Hammott has argued here that it is in fact the Devil’s Armchair in Rennes-les-Bains. It led him to his alleged discovery of a tomb as featured in the upcoming documentary Bloodline the Movie. 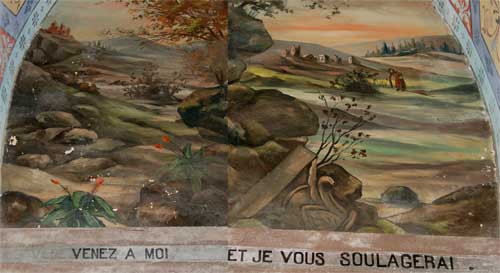 It was French photographer and researcher Jean Brunelin who first published a picture of the left and right tableaus combined into one coherent landscape on Rennes-le-Château-Archive.com. Much like the two paintings in the church of Rennes-les-Bains, Crucifixion, and the Christ and the Hare actually are one painting, so are the two scenes on both sides of the mountain. The two halves fit eachother perfectly. But there’s more to it. Like in his garden, Saunière made use of a number of inversions. On the left it’s summer and everything is in bloom. On the rights it’s winter, it’s a barren landscape where there are no flowers to be seen. The sentence below the fresco is still one coherent piece: VENEZ A MOI ET JE VOUS SOULAGERAI, come to me and I will comfort you.