In 1900, the municipal council of, Rennes-le-Château’s approved Abbé Saunière’s request to dig a caveau in the cemetery, to serve as the last resting place for him and all future

village priests. Construction was started in 1901. The caveau consisted of two adjacent separate burial chambers that could each contain 6 coffins. They were dug out, in the western wall of the cemetery. Bérenger Saunière was laid to rest in this vault, that he himself had built. The place was marked with a simple concrete tombstone and a cross. Some time later, a stone relief would added with a portrait of Saunière. The portrait however was wrongly copied from a photo of his brother. The two brothers, that were mixed up many times during their lives were now even mixed up in death.

Marie Dénarnaud died in 1953 at the age of 85. She was buried in the same vault, next to the man she had served for so long.

In the early morning of 14th September 2004, a substantial police force sealed off the village of Rennes-le-Château. Around 7 o’clock, the remains of Bérenger Saunière where moved to a new tomb where he was laid to rest for the last time below 5 tons of concrete. The decision was taken by Major Jean-François L’Huilier of Rennes-le-Château and, Saunière’s descendants, as he explains in this interview, and in a French article in regional newspaper La Depêche du Midi (bottom of the page). It’s remarkable, L’Huillier talks about descendants. It is well known the Abbé didn’t live like a saint, but this is the first indirect evidence that he actually produced, offspring with someone., As a reason for moving his grave, the mayor mentioned “the family and myself, could no longer allow the hordes of treasure seekers and tourists to swarm the small village cemetery and violate the graves”. There is now a sturdy lock on the iron gate that, oh irony, Saunière put there himself to keep any spectators away from his own private grave digging. The remains of Marie Dénarnaud still remain in the caveau. The cemetery is opened for all public in the month of November.

Saunière left us with a riddle on the top of the Cross that marked his original grave. There is an inscription reading : INRI with an inversed ‘N”. The inscription refers to the almost identical inscription on the cross at Jesus’ crucifixion: INRI, Iesu Nazarenus Rex Iudeorum (Jesus of Nazareth, King of the Jews). One person has pointed out that NAZARETH backwards is HTERAZAN, in Hebrew HA TE RATZ AN, which means ‘where is the mysterious room’ So Iesu Nazareth Rex Iudeorum becomes ‘I knew where the king of the world’s mysterious (or secret) room (or place) was’. 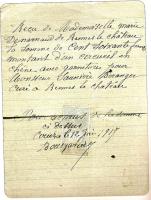 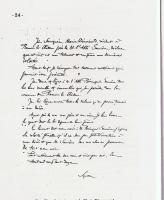 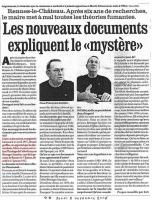