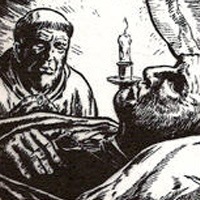 Saunière’s predecessor as prête of Rennes-le-Château from 1776 to 1792. Bigou was the priest and confidant of the family Hautpoul de Blanchefort. On her deathbed, Marie de Blanchefort, allegedly confided her family’s secrets to him as she was the last member of the main branch of the Hautpoul family. Bigou is believed to be responsible for the enigmatic engraving of her horizontal (arcadia stone) and vertical tombstone and allegedly hid parchments, with clues to, her secret in the church at Rennes-le-Château, where Saunière later found them. Antoine Bigou is at the very root of what most people consider to be the mystery of Rennes-le-Château.,

Like Saunière, Antoine Bigou started his career in the Pays-de-Sault region, in the tiny village of Le Clat. This village lies close to Niort-de-Sault, the birthplace of Marie de Blanchefort.

In 1774, Bigou succeeded his oncle Jean Bigou as priest of Rennes-le-Château, which had by then become the home of de Hautpoul de Blanchefort family. Marie de Blanchefort died in 1781.

In August 1792, as a result of the French Revolution, a law was passed dictating that the clergy were to be made employees of the state, elected by their parish or bishopric, and the number of bishoprics was to be reduced. All priests and bishops were, to swear an oath of fidelity to the new order or face dismissal, deportation or death. A group of some 20 priests from the region of Alet-les-Bains fled to Spain headed by, Charles de la Cropte de Chanterac, the last bishop of Alet. At least 5 of them arrived in 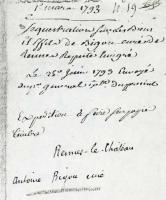 Terrassa, close to Sabadell and one in Llorena, both villages in northern Spain. One of them, whose presence in Spain is actually documented was François-Pierre Caneuille, the priest, of Rennes-les-Bains at the time.,

It is in this climate of unrest and revolt that Bigou had to hide his alleged secret. He was 73 when he left Rennes-le-Château and perhaps knew it was unlikely he would return. It is believed he covered the external entry of the church crypt with Marie de Nègre’s tomb and encoded a message in her tombstones. Additionally he is said to have left a parchment in the wooden baluster supporting the pulpit on which he indicated the location of the tomb and its special significance. It was this parchment, Abbé Saunière is said to have retrieved over 100 years later.

Before he left, Bigou wrote a peculiar page in the parish registry reading multiple time “Jesus de Gallilée n’est point icy” (Jesus of Galilee is not here). This phrase has led to much speculation as to what the priest meant. Veteran French researcher André Douzet has written some interesting articles about this.

A religious Spanish group claims to have Bigou’s diary in their possesion. Patrice Chaplin, in her book City of Secrets, claims that Bigou lived his last years and was buried in a forest near Bésalu in northern Spain. That last claim can’t be true. 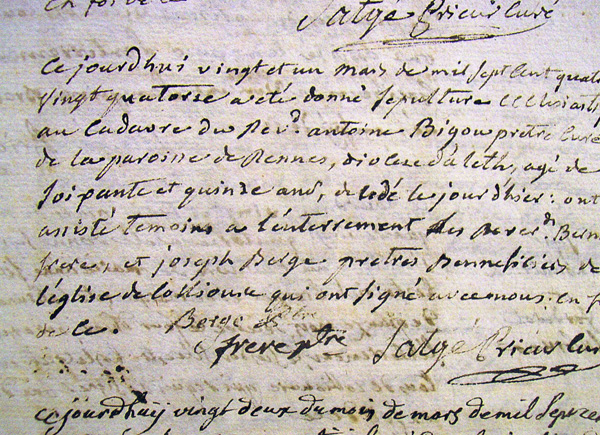 Bigou signed over his possessions to the state before he left Rennes-le-Château in March 1793 (first document in this article). Until 2 years ago it was widely assumed Bigou had died in Sabadell in Spain as it was there that most French priests fled and were their bishop Charles de la Cropte de Chanterac died and was buried in the local church. However, early 2009, an unknown French researcher found Bigou’s death certificate in the ancient church register of Collioure, a beautiful village on the Mediterranean shore. Antoine Bigou died on 21st March 1794 and was buried in the local cemetery. He was 75 years old. Collioure was occupied by the Spanish at the time (since 1793) and became French again after the siege of Collioure two months later.

One thought on “Antoine Bigou”