It is probable that whatever Saunière discovered had to do with the ancient crypt beneath his church. When he first arrived in Rennes-le-Château in 1885, the entrances had been sealed off for over a century. Most likely by his 100 year predecessor Antoine Bigou, who fled for the Revolution and wanted to conceal the ancient crypt for, looters and protect the aristocraty buried there. It is thought that, among the documents Bigou hid in the church before he left for Spain in 1792 was the parish register in which the burials were recorded as well as instructions on how the entrance to the crypt could be re-opened.

It is no secret there are tombs below the church. They are mentioned several times. In the register for 1725 to 1781, on the death certificate of Anne Delsol, it says, “…by Maître Michel, curé of St. Just in my presence and with my consent she has been buried on the thirty first day of the said month in the church of this place in the Tomb of the Seigneurs which is beside the Baluster in the presence of the said Maître Michel, curé of St. Just and of Maître Delmas, curé of the Bains (Rennes-les-Bains) in witness whereof…”. The Baluster that is referred to is the wooden support pillar of the old pulpit in which Saunière found the parchments that kicked off the mystery. In the will of Henri d’Hautpoul of 24th April 1695 it is stated “voulant qu’après mon décès, mon corps soit enseveli dans l’église paroissiale dudit Rennes, tombeau de mes prédécesseurs…” (after my death, my body must be laid to rest in the parish church at Rennes, in the tomb of my ancenstors). The Hautpouls inhabited the Château d’Hautpoul from the 15th century. The fact that in the 18th century there are still relatives and allies being buried there, is an indication there must be a big crypt with many tombs. Soundings have demonstrated there are two large cavities beneath the church on two levels. Saunière almost certainly regained access to this crypt and sealed it off permanently later.

According to archaeologist Brigitte Gibrac-Lescure, the church was consecrated in 1059 by Guifred, bishop of Narbonne. She even suggests a possible foundation by Guilemme de Gelone in the IXth century judging from the striking similarities between the design of the Knight’s Stone, the Visigothic altar pillar and similar features in the Abbey of St. Guilhem-le-Désert. The Church was the chapel of the Château of the first Counts of Rhedae, Guillem’s successors. The crypt might well house their remains, making it possibly one of the oldest crypts in France.

Another theory suggests that, in line with medieval archaeology in France and specifically the Languedoc, the crypt is part of the ‘Reliquary Church’. The church could have been built on an ancient site of worship and contain the relics of martyrs or saints that died for the Christian faith. That might well explain why the Lords of Rennes specifically wanted to be buried in this place. In this case we would be talking about a crypt dating from the Vth to the VIIIth century and beside it a seignoral tomb, built some time after that.

Unfortunately, since the Church is a listed building, no excavation can be done without the approval of the French authorities, that have so far, refused any co-operation in this field.

The Brussels architect and Rennes-le-Château researcher Paul Saussez did extensive research into the church and the crypt. By studying the church, its architecture, its renovations, the parish register, the archives of the diocese, and similar churches in the area, he composed a number of 3D images that he published in 2002. The pictures were previously published on www.renneslechateau.com and, carry the explicit copyright of Paul Saussez. 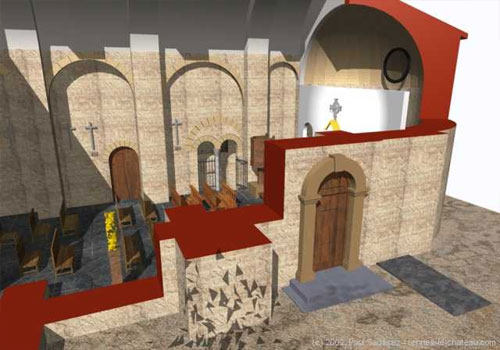 Originally, until around 1740, there were 3 entrances to the crypt. 1) inside the church,, next to the pulpit,, 2) outside, at the back of the church in the cemetery and, 3) outside, where the church garden is now (stone slab right of the wooden door) 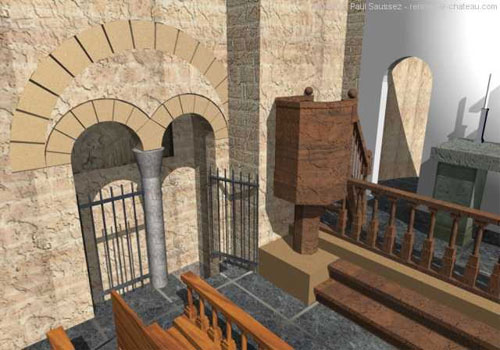 Entrance 1 inside the church as it, originally looked., Notice the similarity, between the double arch and the, inscription on the, Knight’s Stone, 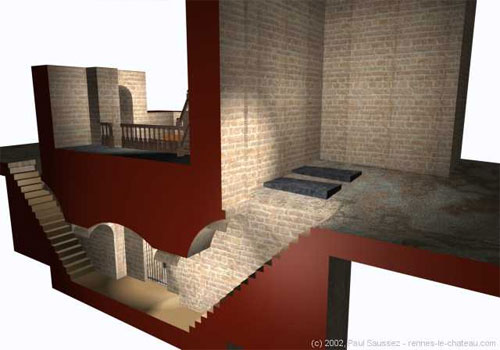 The Crypt as seen from the cemetery entrance. Not coincidentally, this is the place where Antoine Bigou placed the tomb of Marie de Nègre d’Ables to conceal entrance 2. 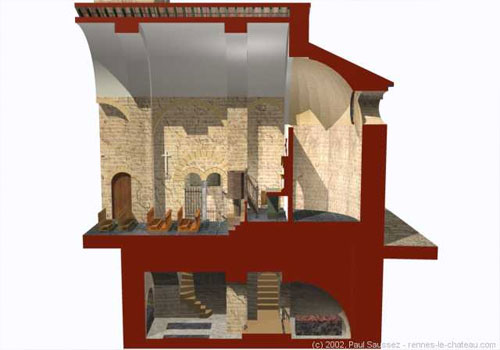 Cross section of the Church and the Crypt beneath it. Soundings by an American team in 2002, have demonstrated that there is definitely a large cavity in this area. 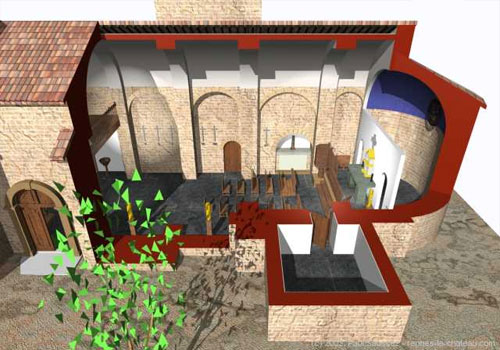 The Church as Saunière found it in 1885 before he started his renovations. The inner entrance of the Crypt has been sealed off by a bulkhead and the garden entrance of the Church has been replaced with a Sacristie. You can see the, original Altar on two stone pillars. 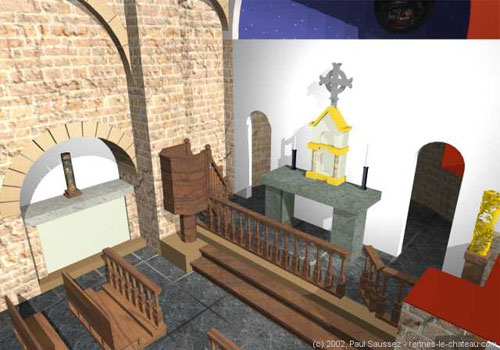 1885 state, detail of the original Altar and Pulpit and the sealed off entrance to the crypt. 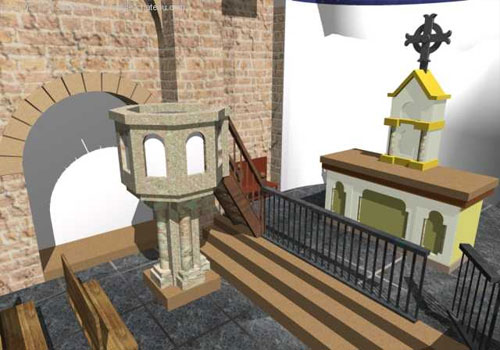 View in 1891, Saunière has removed the wall behind the old Altar and has installed, the new Altar, that is still there today, as well as a new, stone Pulpit. In the support pillar of the old pulpit he removed, bellringer Antoine Captier allegedly found a small glass vial with documents. 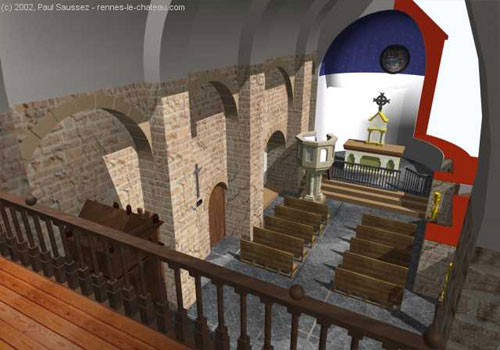 The Chuch in 1891 seen from the balcony (which was removed by Saunière and replaced by a giant Fresco). 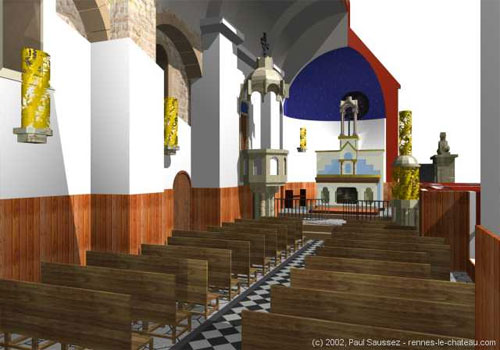 View after Saunière has finished his renovations in 1897. In front of the original walls, plastered bulkheads have been built. 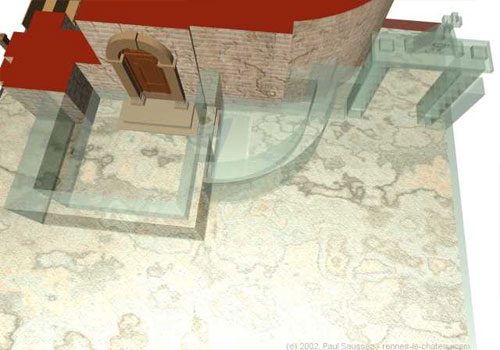 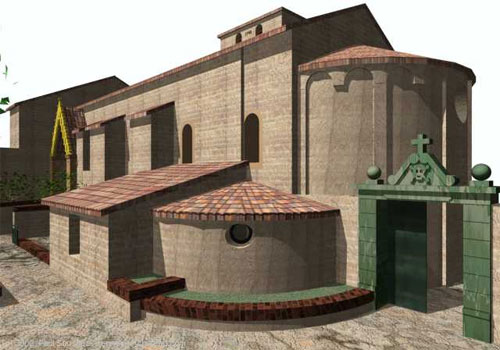 model of the Église Sainte-Marie-Madeleine in its current state