In January of 1890, the Rennes-le-Château Municipal Council approved Abbé Saunière’s request to refrubish the public square in front of the Church. After a year of gardening, the first bit was completed and officially opened by the placement of a statue of Notre Dame de Lourdes on the upside-down Visigoth pillar, Saunière had saved from the old altar. At the ocassion, in the presence of the bishop Monseigneur Billard of Carcassonne, 24 children of the village made First Communion. They did a Tour de Mission, carrying the statue of the Virgin around the entire village in, a procession involving all parishioners. At the end of this procession, the statue was installed on the pillar.

1. The circle around the Calvaire (16) matches the outline of the back of the Church.
2. The Calvaire (16) in the garden matches the position of the Altar (20) inside the Church
3. The position of ths statue of Notre Dame de Lourdes (7) matches the position of the confessional (19) in the church. Was this the reason that Saunière had the words “‘PENITENCE, PENITENCE” inscribed on the pillar?
4. The Knight’s Stone was found straight in front of the Altar. Saunière later used it as a stepping stone towards the Calvaire (16) , in the exact same position.
5. The Grotto, (13), in the garden is in the same position as the “Isoloir” (9), the Secret Room adjacent to the Sacristie. It is generally assumed, Saunière has this room built in 1892 to cover the entrance to the Church’s crypt. What does that say about the Grotto of Mary Magdalene? 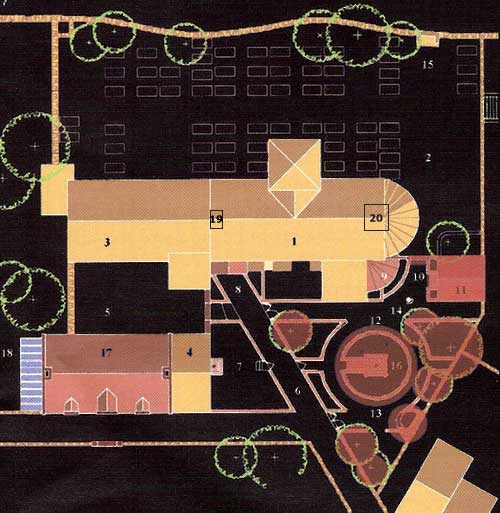