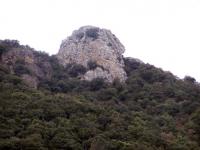 In the 10th century, the Visigoths were the first to build a fortication on the white rock opposite Mount Cardou. In 1125, the castle was signed over to the bishopric of Alet(-les-Bains) by its owner Bertrand de Blancafort (Blanchefort) who swore allegiance to the Viscount Bernard Aton of Alet. Around 1130 he allegedly asked the Knights Templar to start exploiting a goldmine near the castle. It was whispered that this operation was a cover up to dig up the treasure of the Visigoths, much of which was gathered during the sack of Rome on 24th August 410 by the Visigoth leader Alaric I the Goth. Bertrand de Blancafort wasn’t the 6th Grandmaster of the Order of the Knights Templar as is sometimes claimed. Nor was he related to the Grandmasters familiy who came from Guyenne.

In 1209 the castle was conquered by Simon de Montfort in the Albigensean Crusade. He gave the castle, which was now called Château de Blanchafort and the surrounding lands to his comrade in arms Pierre de Voisins. The lands included Rennes-le-Château, where De Voisins found a permanent residence in what we now know as the Château Hautpoul.

The castle lost its use with the introduction of gunpowder and canons in the early 16th century. Eventually it was abandoned after 1659 with the signing of the Treaty of the Pyrenées which meant there was no longer a border to guard.

French historian Labouisse-Rochefort mentioned the castle in his 1832 book ‘Voyage à  Rennes-les-Bains’, in which he recounts a local legend of a treasure guarded by the devil in the area of the château. 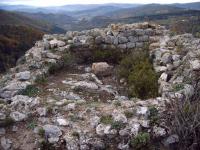 There is very little left of the Château Blanchefort. There is no path to its ruin so it’s quite a climb to get there through the dense vegetation. The view upon reaching the summit makes it well-worth the effort. Given its important role in the history of the region, the Château was very small.
According to English researcher and author Henry Lincoln in his book the Holy Place, the Château de Blanchefort is part of a huge pentagram in the Rennes-le-Château landscape.

One thought on “Château de Blanchefort”