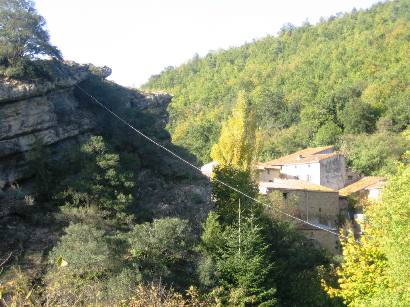 The ruins of this castle, close to those of the Château-de-Bézu lie on the D14 between Rennes-les-Bains and Bugarach. Its connection to the mystery of Rennes-le-Château comes from Jules verne. In his book Clovis Dardentor, he mentions that what is left of this castle has the shape of a ship with three bridges. It is pointing towards Mount Bugarach. Verne connects it to Captain Bugarach, the man he named after the mountain.

If there’s anyone out there with a clear picture of the boatshape of these ruins, I’d be very interested to post it here!

Many thanks to the members on this forum for their information, the photo and allowing me to post this.