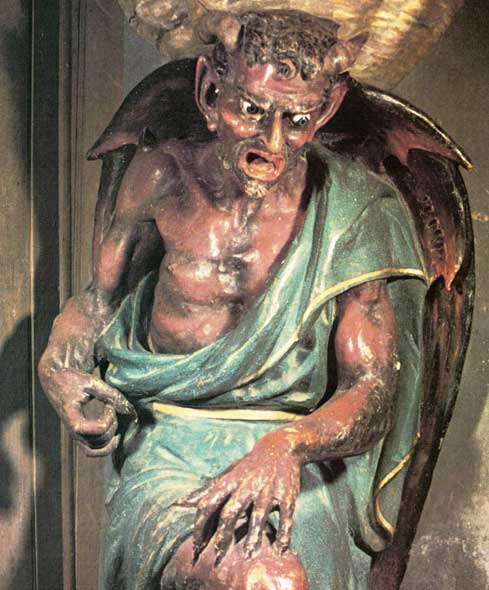 The first thing you notice on entering the Church of St. Mary Magdalene in Rennes-le-Château is the crouching devil just round the corner. For over a century now, the demon has been scaring the hell out of kids visiting the church with their parents (talking from experience here).

If any feature in Abbé Saunière’s domain in Rennes-le-Château has attracted attention from visitors and researchers it’s this beast. Gérard de Sède, in his book the Accursed Treasure of Rennes-le-Château, was the first one who made the connection between the statue and a demon called Asmodeus known to the wider audience. Perhaps De Sède was inspired by Le Serpent Rouge (the Red Serpent). This apocryphical document was deposited in the French National Library in 1967 as part of Les Dossiers Secrets. It mentions Jesus and Asmodeus watching the alignment of the black and white squares that make up the chessboard floor in the back of the Church. 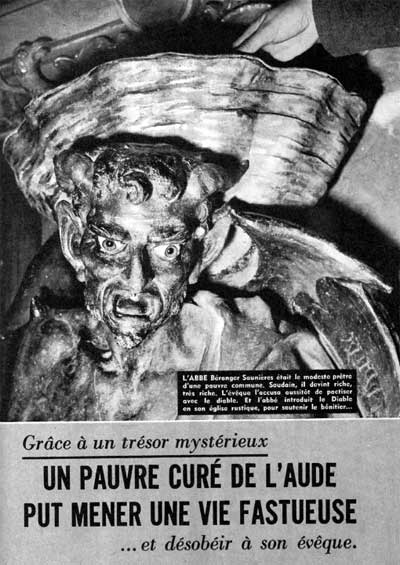 If the statue was indeed intended to represent Asmodeus, a whole lot of opportunities present themselves to link Saunière’s works to stories of Treasure. In the 17th Century Book of Demonology Ars Goetia Asmodeus showeth the place where Treasures lie, and guardeth it. In the Talmud, he aides in the construction of the Temple of Solomon. Those are only two stories Asmodeus features in. It’s not hard to see how this statue gets the heads of Treasure hunters racing. In April 1996 one of them could not restrain himself and decapitated the poor devil, probably expecting to find a clue or a Treasure inside the statue. The original head was never found back and has since been replaced by a replica. Although it’s skillfully made, it is far from identical and has a lot less expression than the original.

Many researchers, Ben Hammott being one of them, have remarked that this Devil might be meant to sit in the Devil’s Armchair, a stone monument in the woods near Rennes-les-Bains that also appears to be depicted on the big Fresco overseeing the statue and the rest of the Church. 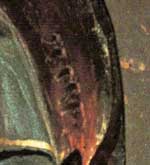 The crouched devil has his wings half opened. On the inside of his left wing 5 ‘runes’ are visible. Some of them don’t appear to mean anything while others have been identified as the word zouz, meaning crouch or liquid silver in Hebrew. The fingers of the right hand of the statue form a circle. Some researchers see a reference here to the Source du Cercle or Source of the Circle here, a source within 10 metres from the Devil’s Armchair. This source was earmarked by Abbé Henri Boudet as the centre of the Cromleck (stone circle) he described in his enigmatic book La Vraie Langue Celtique et le Cromleck de Rennes-les-Bains. It’s perhaps coincidence that a devil’s head features on the Map of Celtic Rennes that accompanied the book. The links and references are all quite remarkable but become a little more mundane when it’s explained that the hand has a circular opening because it originally held a trident. It was removed almost straight after installation because it tore up the clothes of the visitors. Needless to say that here too speculations about what this devil held in his hand have reached dizzying heights. Was it the Spear of Destiny, a Merovingian flag, a Habsburg Shield, a piece of the True Cross, a Templar Sword, the Holy Grail or was it a broom after all? 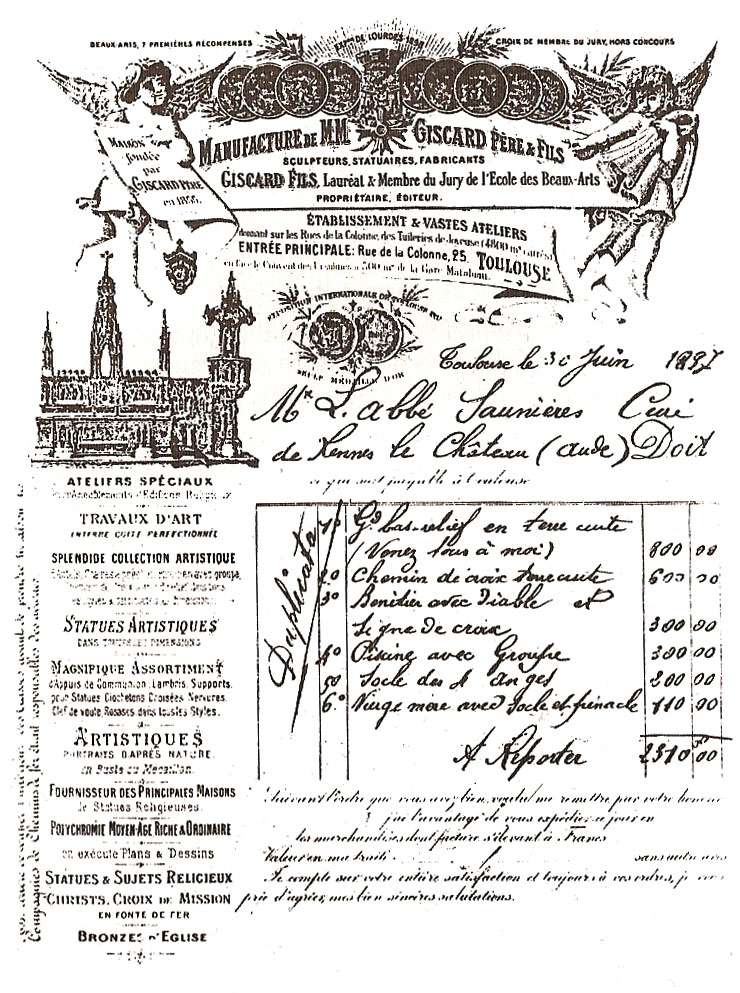 Abbé Saunière ordered the demon statue in 1897, together with most of the rest of his Church decorations from Maison Giscard in Toulouse. Where most of the pieces where selected straight from a catalogue, the demon was made especially for Saunière. Unfortunately, no correspondence about it has been preserved apart from the bill, dating from June1897. This bill offers us a clue as to what Saunière actually ordered. It says: Bénitier avec Diable, meaning Baptismal font with Devil. As it appears here, Saunière just ordered a statue of the devil supporting a baptismal font. Looking from the perspective of inversions, a method the priest applied throughout his domain, it must me noticed the Devil is in the same position as Jesus being baptised by John on the opposite wall. This too would indicate it is the devil we are dealing with here. This hypothesis makes even more sense in relation to Saunière’s sermon from October 4th 1885, the one that got him suspended only 8 months after he had become the priest of Rennes-le-Château. He said:

The Republicans, now there’s the Devil to be conquered and who needs to bend its knee under the weight of Religion and baptisms. The sign of the Cross is victorious and with you…

If you take a step back from the Devil, you’ll notice he is carrying a baptismal font surmounted by four angels making the sign of the Cross. If there is any doubt left there is a text painted below them stating:

This group of statues appears to be nothing other than Saunière’s maiden speech turned to stone – well, wood and plaster that is. It’s a one hundred year old practical joke.

Many thanks to Klaas van Urk. The issue on display in this article of French magazine Tous Savoir 1958 can be found in the extensive library on the website of Patrick Mensior

3 thoughts on “Devil Statue or Asmodeus”