On Ascension day 1243 a French army led by Hugh of Arcis started the siege of the Montségur Castle an inpenetrable fortress, perched on a 1,100 meters high rock. It was the apotheosis of what is today know as the Albigensean Crusade. At the bottom of the hill carrying the massive fortress, Peter Amiel, archbishop of Narbonne erected his lavishly ornated tent to watch the death blow to the Cathar faith from the front row.

Last of the Cathars

According to the Cathar faith a good god called Rex Deus made the heavens and the human soul while an evil god called Rex Mundi entrapped that soul to suffer in the flesh of the human body on earth which was seen as an evil place.  Salvation lay in the human soul’s escape to the spiritual realm from its prison of flesh in the material world. The Cathar religion was divided between a majority of Credenti (believers or followers) and a minority of  perfected ones the Perfecti. These Perfects had committed themselves to the celibate and dietary rigors and had passed through a ritual known as consolamentum a type of Cathar baptism. Only perfecti were considered as members of the cathar Church. The Cathar Church in comparison to the corrupt practices of the medieval Catholic Church, was an honest and dedicated movement that rejected the trappings of wealth, lust and power.  There were no church buildings or property.  The Cathar Church did not demand tithes of its members and it educated its children, both male and female.  As such it was a threat to the Catholic Church and after numerous failed attempts to sway Cathar followers away by persuasion Pope Innocent III sponsored a crusade to put down the heretic faith in 1209. The campaign lasted for decades and was led by French noblemen Simon de Montfor an extremely orthodox religious man.

Around 1233, the castle of Montségur had become the central seat of Catharism in the Languedoc and home of bishop Guilhabert de Castres, a theologian and bishop. By the time the 10,000 royal troops started the siege in 1243, there were some 200 Perfecti and 100 soldiers present led by Peter-Roger of Mirepoix.

The epic siege of Montségur lasted 9 months until the fortress fell in March 1244. In an uncharacteristic act of mercy, Hugh of Arcis made known that all who would renounce their faith would be spared. Any sins of the past would be forgiven and the only condition was that they would make themselves available for an interrogation by the French inquisition. Not one of the Perfecti responded. On Sunday 13th March, 21 troops in the besieged castle asked for the Consolamentum, making a brave step to a certain death. On 16th March the 200 Perecti and the 21 new Cathars were burnt alive.

The castle was completely destroyed in the aftermath. The current fortress was built in the 17th century.

Link to the Mystery

The link with the Mystery of Rennes-le-Château lies in the fact that shortly before the surrender Cathars escaped from the inpenetrable rock carrying an unknown treasure.

From the documents of the Inquisitors of Carcassonne it is surmised that four Perfecti covered in wool blankets descended on ropes from the summit of the promontory to the bottom of the Lasset gorge to hand the treasure of the heretics to Pons-Arnaud de Castellum Verdunum in the Sabarthes. Since Peter-Roger of Mirepoix had been given permission to take all gold and silver with him, what the four intrepid Cathars brought to safety in the caves of the Sabarthes on the lands of the Lords of Castellum Verdurum certainly wasn’t that.

There has been much speculation as to what the content of this treasure was. Montségur is often mentioned as being the Holy Grail castle from Wolfram von Esschenbach’s epic poem Parzival. One theory is that the men took the Grail with them to safeguard it from the royal troops and the church. Rennes-le-Château is mentioned as a possible place where it was eventually hidden. 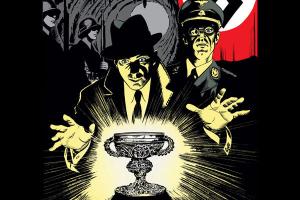 Because of the Grail myths Montségur became the focus of Nazi archeological expeditions by Himmler’s Ahnenerbe a division of the SS searching for Aryan links with modern Germany through archeology and anthropology. Montségur was brought to the attention of the Nazi’s by Otto Rahn who explored the ruins of the castle in 1929 and wrote two popular Grail novels linking Montségur and Cathars with the Holy Grail: Crusade Against the Grail in 1933 and Lucifer’s Court in 1937. On March 16, 1944 the 700th anniversary of the fall of Montségur a Nazi plane carrying Alfred Rosenberg flew over the ruins in a swastika pattern.

Richard Wagner visited Montségur and Rennes-le-Château (mind you, even before Father Saunière) around 1865 to research the Grail. It was around the time he was writing his last epic opera Parzifal. Local legend says an extramarital child of the composer and a local girl was buried in the Rennes-le-Château cemetery.

Animations of Montsegur through the ages

One thought on “Château de Montségur”