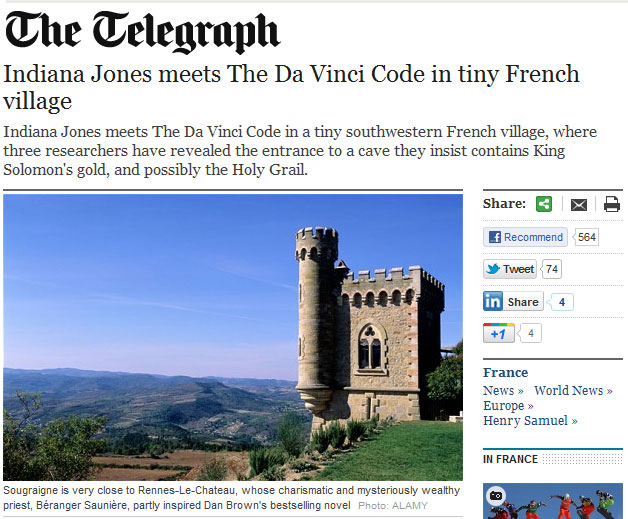 In July 2011, a group of longtime French researchers fell out with eachother and in the slipstream published their research from recent years including what they thought was the location of the treasure of the Visigoths and the source of Saunière’s wealth. The whole scandal resulted in the biggest French media treasure hype of the last 50 years.

The whole theory built on Franck Daffos’ theory that Saunière created a cartoon-version of the treasure-map Henri Boudet coded into his incomprehensible book The True Celtic Language and the Cromleck of Rennes-les-Bains. In short: the Romans sacked Jerusalem, taking with them the treasures of the Temple including the Ark of the Covenant and the Menorah. The Visigoths subsequently sacked Rome and took those treasures with them to their Kingdom in the south of France where they hid the treasure near their capital, now known as Rennes-le-Château. In 1645, a sheep dropped in a hole on the lands of Lord Blaise d’Hautpoul. When its shepherd tried to retrieve the animal he discovered it had landed on top of a treasure. The shepherd loaded his pockets full of gold and reported the incident to d’Hautpoul. Part of the treasure was taken to the sanctuary of Notre-Dame de Marceille, part ended up in the pockets and palaces of illustruous French historic figures like the Jansenist Bishop of Alet Nicolas Pavillon, Nicolas Fouquet, Colbert and King Louis XIV himself. The spiritual treasure was left in what is called ‘le cache’, its original finding place. The spiritual treasure is whispered to be what is left of the Ark of the Covenant: the two stone tablets, Moses brought with him from mount Sinai, inscribed by God himself with the ten commandments. The historical context is further described in this article. Your webmaster interviewed Franck Daffos in April 2008 on video, during which Daffos elaborates on his theory in a lot of detail. Watch that interview here.

The researchers Franck Daffos, Pierre Jarnac and Didier Hericart de Thury put the location of the treasure on a hilltop called Pech d’en Couty in the vicinity of Rennes-les-Bains. According to them, the location was hidden by ways of various clues by various people. 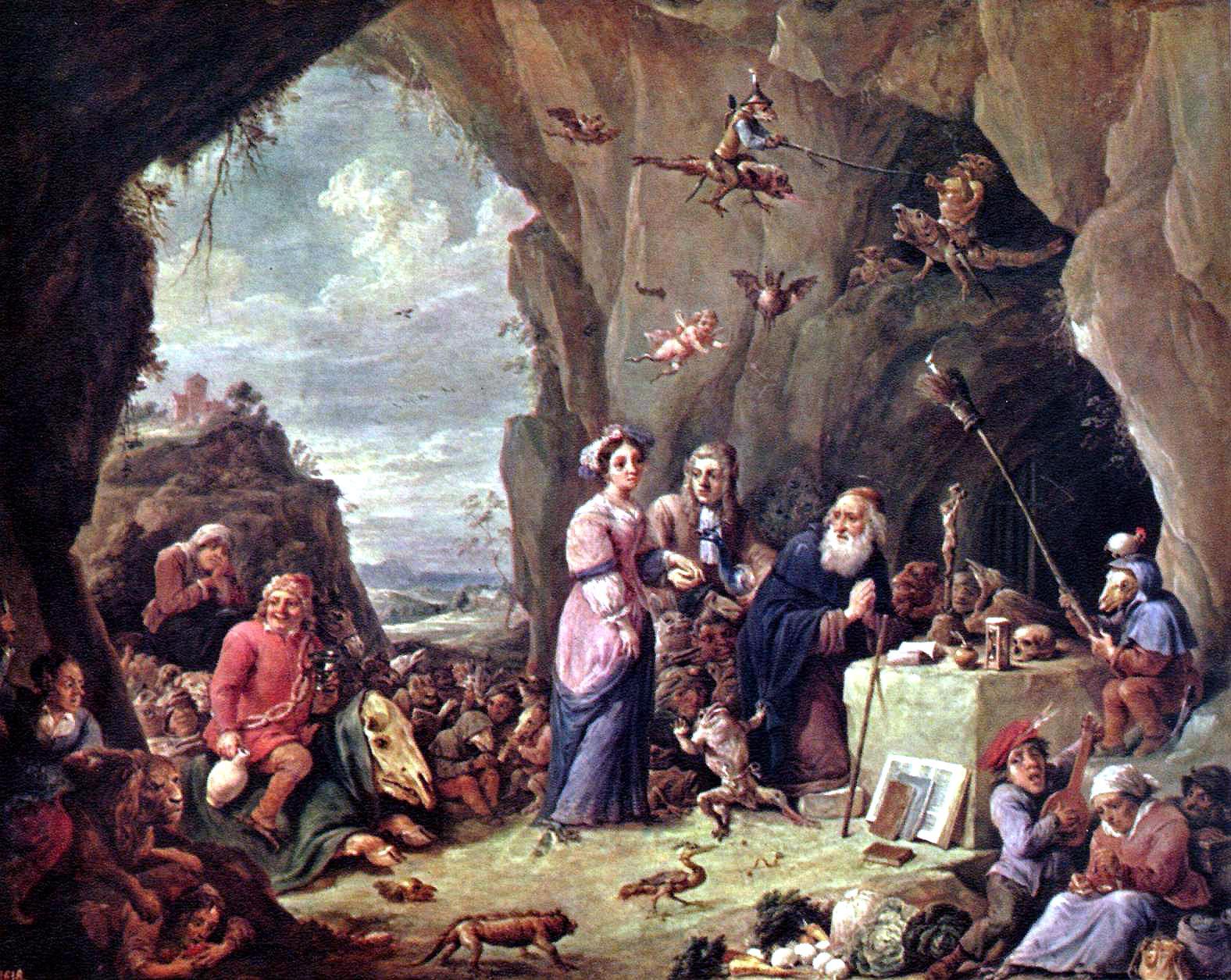 The Flemish painter David Teniers the Younger (1610-1690) hid a clue in his work Tentation of Saint Anthony. The researchers arrive at this painting from the phrase that is coded in the Grand Parchment Abbé Saunière allegedly found in his church:

How they came to select this particular painting is described in the book l’Or de Rennes by Franck Daffos and Didier Hericart de Thury. To give you one hint, the authors claim that the mountain in the back of the painting is Mount Bugarach.

Saunière’s Stations of the Cross 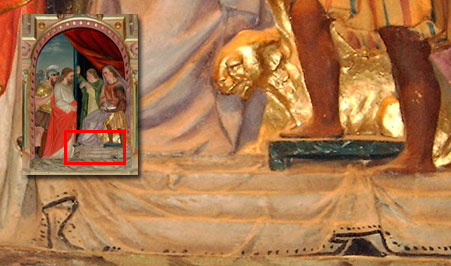 After he had restored his parish church, Saunière installed a new set of Stations of the Cross. Many people believe, this is where he coded the location of his treasure. Saunière ordered the set straight out of a catalogue from a firm called Giscard in Toulouse. There are multiple sites known in French where exactly the same Stations were bought and used like for example in the church of St. Jean d’Alcas. Meticulous comparisons of the known sets and the catalogue led the researchers to believe that there is an anomaly on the first Station as Franck Daffos explains on his forum here. The ‘R’-shape on the station refers to an R-shaped rock formation near the Pech d’en Couty. The black spot on the right is the rock (dolmen) at the bottom of the Pech d’en Couty that is also shown on the combined Pieta of Rennes-les-Bains. If you climb up from that rock you’ll reach a small entry hole to the cache as indicated by the gold lamb on the Station.

To be continued as usual 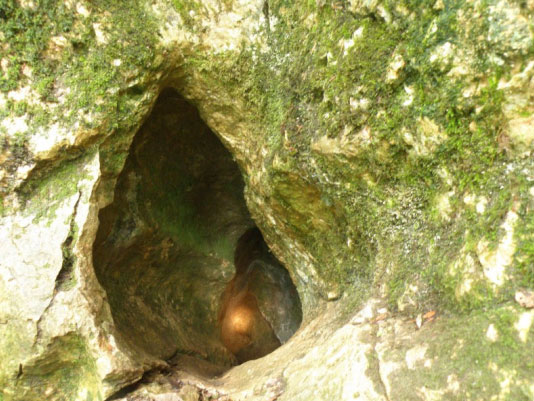 The location has been visited, photographed by Christian Doumergue in this PDF document and Mariano Tomatis on his website. The actual entrance is quite small. The cave behind it is not too big either and quickly comes to a dead-end. According to the researchers this is the actual spot but this is not the main entrance. That to this day remains unknown or undisclosed. In true Rennes-le-Château fashion I fear we’ll never know…

Location of the Pech d’en Couty