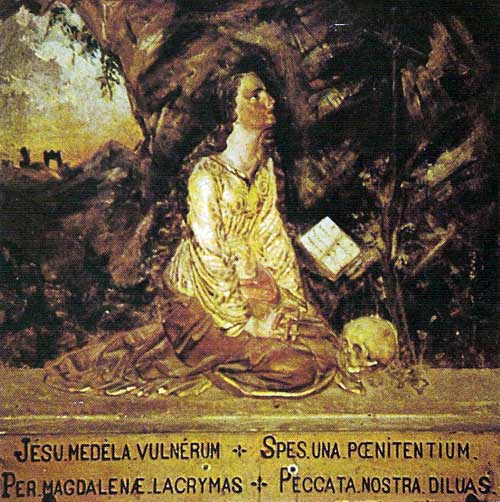 Saunière's Altar as it looked in the 1960s

One of the first renovations Saunière undertook in his church was the replacement of the old altar. , This new altar he installed and that we can still see in the Eglise Madeleine today was bought from Maison Monna of Toulouse and cost 770FF. The altar was paid for by Madame Cavailhé de Coursan. The old altar was transported to the presbytery. It would later serve in his personal chapel at Villa Bethania after his suspension by Mgr. Beauséjour.

The new altar came with a bas relief of Mary Magdalene in a, grotto with some of the usual props: a skull, a book and a cross. The bas relief was based on a painting by Johann Gerbhard Flatz, a well-known Nazarene and painter of religious scenes in the 19th century. An engraving of this painting was discovered by German researcher Andreas Eckel early 2009 and then linked back to Rennes-le-Château. 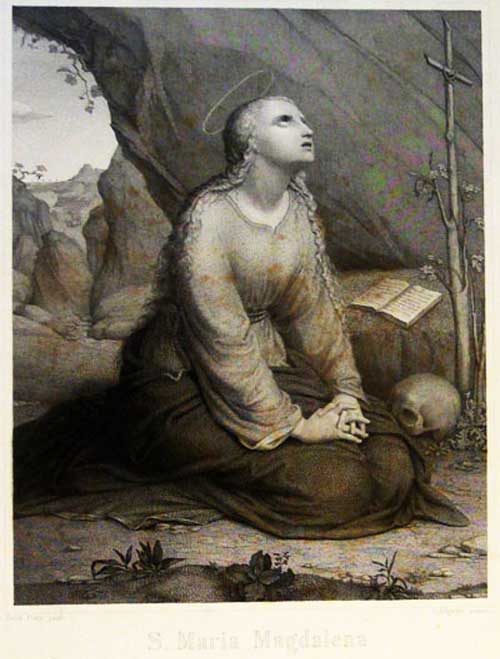 Until halfway the 1980s, the church of Puichéric had a stained glass window almost identical to the scene on Saunière’s altar as you can see from the photo on the left (copyright André Goudonnet) of that window in 1982.

At the base of the altar Saunière had a phrase inscribed: 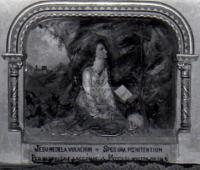 It is bad Latin for Jesus, you remedy against our pains and only hope for our repentance, it is thanks to Magdalene’s tears that you wash our sins away. These same two lines feature at the bottom of what is known as the, Grand Parchment. Today the inscription is no longer there. 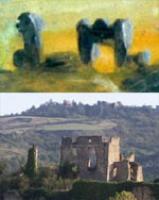 The story goes that the bas relief was colored by Saunière himself, with the help of his good friend Abbé Eugène Grassaud.

At the left side of the scene, what appears to be two buildings are painted. They don’t feature on the original painting by Flatz. People have concluded they are the Tour Magdala and the Chateâu Hautpoul, but that is far from certain. You might as well say that they are the letters J and M for Jesus and Mary or the ruines of the Château de Coustaussa as is, claimed by others. If they have been indeed been meant to show the,

silhouet of the Rennes-le-Château hilltop in the distance, there would be a similarity with the view from the Grotte du Fournet in the Vallée des Couleurs that can be seen from the, Tour Magdala., That distinct possibility has become unlikely with the discovery of this engraving from 1850 as Saunière hadn’t been born yet at that time, making the whole chain of events highly complex and speculative.

symbol). There are a couple of, Mary Magdalene statues known that have crossed fingers like on the engraving and the bas relief-copy. One is, in the Provence near St. Maximin La Saint-Baume and the other one close to Rennes-le-Château in the church of Belpech. The strangely crossed fingers are also found in some enigmatic paintings of great artists that are sometimes associated with the enigma.

The most bizar anecdote around this theme is without a doubt a story about the death of, Jean Cocteau. The famous French artist was a painter, writer, performer and according to Les Dossiers Secrets alleged Grandmaster of the Priory of Sion. He died an unsuspicious death from a heart attack in 1963. Being a national celebrity, he was placed on the bier and an army of photographers was allowed to shoot him one last time. Jean Brunelin, a well-known French photograper with a great interest in the enigma noticed the peculiar way Cocteau’s fingers were crossed and photographed them. Much to his surprise, when he compared his photos with those of his colleagues shot earlier, he discovered that the hands were folded ‘the normal way’. In other word: someone had purposely forced the deceased’ fingers into this unnatural shape, damaging the corpse. What was so important about the position of a dead man’s fingers that someone violated his deathbed?

The information about Jean Cocteau, in this paragraph is based on an article that appeared in Les Carnets Secrets Magazine, no.5, 2006. More about the Altar and its possible relic is described in this article from 18th January 2008.

If you compare the 1850 German engraving with the bas relief of Mary Magdalene it soons becomes clear that there can be little doubt that either Monna or Saunière used the image or a copy of it as their original. The shape of the grotto, the folded hands, the cross made up of living tree branches, the hair: it is all there. If Saunière added any clues here to the location or nature of what he discovered, it has to be in the text that once stood at the foot of the altar or the J & M buildings on the left.

With the discovery of this engraving, it has become unlikely that the altar bas relief depicts the Grotte du Fournet. 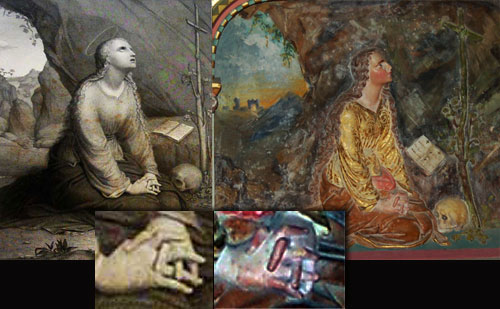 Comparison of Saunière's altar bas relief with Gebhard Flatz' 1850 image of Mary Magdalene, with details of the hands

Another copy in Austria 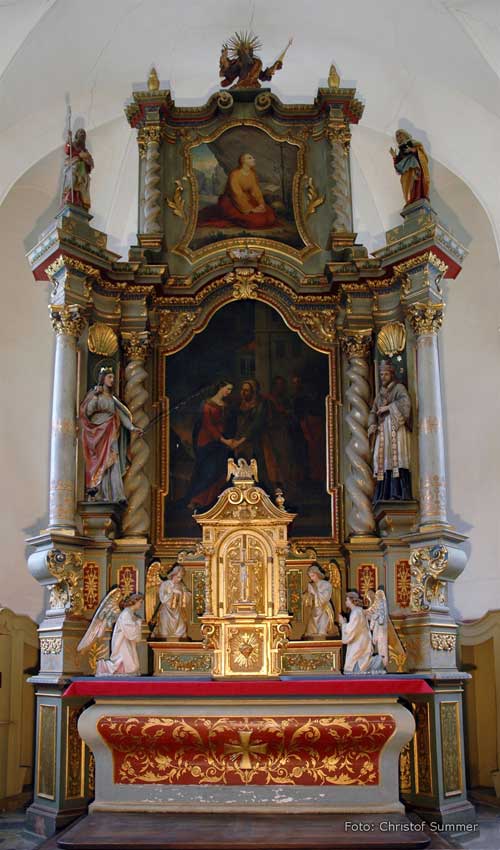 In August 2009, Austrian researcher Christof Summer drew the attention to a work of art in the old local church in his hometown of Nofels (Vorarlberg, Austria). In the back of the church, behind the altar with croix patté, a painting of Mary Magdalene occupies the central panel at the top. The church was built in 1726 – 1728 after the community had been split-off from Altenstadt. The funds came from the Mary Magdalene Humlin.

From the signature at the bottom of the painting it is certain that this concerns a work by local artist Florus Scheel (1864-1936). Apparently this painting, which was produced in 1898, replaced an earlier work of unknown of which we don’t know the subject and artist. It is likely that Scheel, like Julius Allgeyer, copied the original by Johann Gerbhard Flatz. 1898 was allegedly the period that Saunière spent considerable time away from Rennes-le-Château in Lyon.

The relevance of this newly discovered copy lies in the fact that it is executed in full color. The artist who painted Mary Magdalene on Saunière’s altar appears to have stayed very close to the original painting, reproducing Mary’s yellow gown and red mantle. 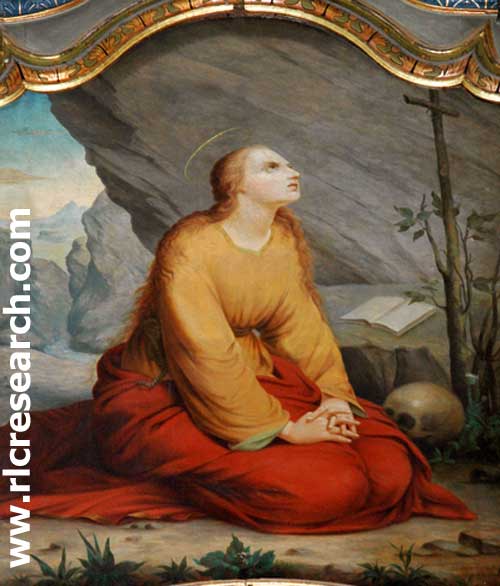 Painting of Mary Magdalene by Florus Scheel in the old church of Feldkirch (Voralberg, Austria)