It was in this Château in Rennes-le-Château that Sigebert IV, allegedly sought refuge in 681 after the assassination of his father Dagobert II. Situated of a natural network of faults and waterways in the mountain, it was the home of the seigneurs of Rennes for centuries. The Château was given to their predecessors, the counts of Voisins by the notorious Simon the Montfort during the Albigensian Crusade. It was in this Château, Marie de Nègre d’Ables confessed to Antoine Bigou and died. Rennes-le-Château researcher Ben Hammott managed to get into the Chateau and to talk to its current resident, Mr. Henry Fatin, whose father, Mr. Marius Fatin, honorary commissaire in the merchant navy, bought the Château in 1946. Mr. Fatin has many artefacts in his Château, researchers would do unsaintly things for, like the great map of the Château Ben managed to photograph during his visit. 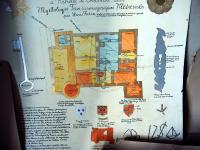 One thought on “Château Hautpoul”