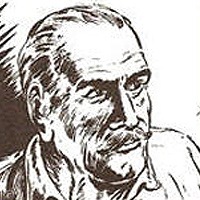 Captier was the gardener of Saunière and the carrilloneur (bell ringer) of the church in Rennes-le-Château. It was him who found a small glass tube in the wooden support pillar of the pulpit. It contained a small piece of paper signed by, Antoine Bigou and gave it to the Abbé. He told his grandson that it was because of his discovery that Saunière had become a rich man and if only he had known… It was after this discovery that Saunière started his excavations in the cemetery.