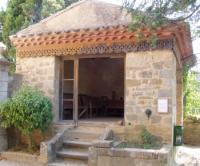 In France, a Reposoir (Viewing Room), was a place where the dead were laid to rest before the burial. The villagers could then visit them to pay them their last respects together before they were trusted to their graves. In the case of Rennes-le-Château it is quite a different story. When Saunière had had permission from the municipal council to arrange, at his own expense, the terrain in front of the church, he built his Grotto, his Calvaire and, in the place where normally the, Reposoir would sit: a little office for himself that double-functioned as a library. Under this small building was a cistern that must have been built by Saunière at the same time since the terrain was not managed in any way and all cisterns were specifically administered since the early 16th century. However, no record whatsoever is to be found in Saunière’s otherwise immaculate administration of work that was carried out on any water source near his church.

It is known that Saunière spent many hours in his, Reposoir before the Tour Magdala was built. He would be sitting there for everyone to see amidst his books and papers. He kept his library there and he is said to have kept the findings of his long marches through the country in bags, hanging over the cistern from the bottom of the Reposoir. There is much discussion as to why the Abbé built his library and office in this strange place, not in the least because of the following story: In 14th July 1895, a fire started in a village house that threatened the rest of the village. Saunière, astonishingly, refused access to his pump. The firemen had to break into his house to force it from him. The next day Saunière filed a complaint to the Gendarmerie for ‘invasion of the floor and the fence’ (that he later quickly redrew).

Wanna know more? Société Perillos has an interesting article about the Viewing Room.