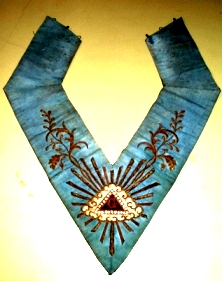 Often,, the mystery of Rennes-le-Château has been linked to Freemasonry. It has been argued that some of the duality Saunière introduced in his church (the inversions in the Fresco, the black and white checkerboard tiles in on the church floor etc.), are Masonic in nature. Any Masonic influence was speculative until April 2007. In that month, Antoine Captier, grandson of Saunière’s bellringer and keeper of most of the Abbé’s archives,, first showed a Masonic Collar (Sautoir in French), that had once belonged to the priest. It had been lying in his attic for a very long time and it had been shown to a number of researchers in private already. Captier is widely seen as the most serious and trustworthy of the French Rennes-le-Château researchers. The discovery proves that Saunière was member of a Masonic society, which will shed a whole new light on parts of the mystery. The church actively disapproved of anything Masonic in Saunière’s time. Bishop Billard, who is considered to have been an important protector of Saunière even launched an anti-masonic mission. Société Perillos discovered that Billard was perhaps not as anti-Masonic as he appears. 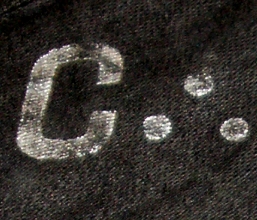 The, Masonic Collar was identified as belonging to the Scottish Rite of the 18th degree Chevalier Rose Croix (Knight of the Rosy Cross). Normally a jewel would be present at the bottom of the collar. On this collar there wasn’t one, meaning either it was lost or Saunière was member of a society that didn’t carry a jewel on their Sautoirs, like the Elus Cohen.

In 1900, Bérenger Saunière attended at least three meetings of a Martinist lodge in Lyon. The Martinists are a masonic order that developed out of the Elus Cohen, founded by Martinez de Pasqually in the second half of the 18th century. As a symbol, the Martinists use a Star of David made up of a white and a black triangle or two interlaced black and white triangles. 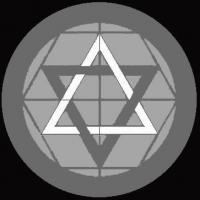 In the pages of the Lodge Minutes book of the Martinist Order of Lyon it says: Dans La registre de la Très Révérente Loge Ã  l’Orient de Lyon “La Haute Philosophie”…sur la liste le présent d’honneur l’Abbé Saunière. Since only Martinists were invited to visit other Martinist Lodge’s meetings there seems little doubt that Saunière was indeed a member of a Martinist order. This also ties in well with the fact that the clergy was very well represented in the order even though officially the Vatican and indeed the Diocese of Carcassonne actively condemned masonic activities of its priests.

In their book le secret de l’Abbé Gélis, the authors (among which, are Jacques Rivière and Claude Boumendil) claim they were presented with a membership document of a certain ‘Order of Alet’ (Ordre d’Alet), carrying the names and signatures of both Bérenger Saunière and Antoine Gélis. The document was dated 1886. This very secretive Order allegedly, propagated a mix of, Visigoth and Cathar doctrines. The authors were shown around two secret underground locations near Coustaussa and Rennes-les-Bains were this Order held its gatherings.

©2007-2012 renneslechateau.nl, all rights reserved, photos of the Sautoir copyright Antoine Captier and Terre de Rhedae, some info has been derived from Guy Patton’s article Saunière and the Occult.