Called ‘Dalle des Chevaliers’ in French, this engraved stone is said to have been the cover stone of the crypt beneath the church at Rennes-le-Château. According to the legend, Saunière found it lying upside down and had it lifted by Adrien Marre and Féliciean Marceau, two local workmen.

Beneath the stone was a hole in which Saunière allegedly found a small pot containing a couple of goldpieces, a Visigoth necklace and a golden Chalice dating from around the 13th century (that he later gave to his friend Abbé Grassaud). He told the workman that he had only found some worthless Medallions of Lourdes and sent them home. He apparently didn’t recognize or appreciate the value of the cover stone itself for he used it as the top stepping stone for the Calvaire where it was ‘re-discovered’ in 1926. It was still lying there face up in 1935 when it was photographed by Lucien Rougé.

According to Henry Buthion, who ran the Saunière estate for some 40 years after he had bought it from Noel Corbu in 1965, the stone once sealed the mural tomb of Sigebert IV. Buthion was convinced that Saunière discovered this tomb and took jewellery and two golden crowns from it that he gave to friends and relations. 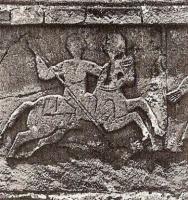 The stone is thought by others to depict the flight of Sigebert IV to Rennes-le-Château in 1681. Others have noticed the resemblances with the official seal of the Knight’s Templar of two men riding one horse. Dutch writer Klaas van Urk recently made a case for the stone to depict the two entrances of the Grail Church Bieta Mariam in Ethiopia, once the place where the Ark of the Covenant was hidden. In his explanation, the left part of the stone depicts the ritual of preparing the Ark of the Covenant, the right image is a Grail Knight carrying the round symbol of the Holy Light. Fact is that the image,  engraved over the double entrance of Bieta Mariam bares a striking resemblance to the right tableau of the Dalle des Chevaliers.

In his book Histoire de la haute-Vallée de L’Aude, Father De Roquelaure explains how this stone was in fact made to commemorate the gift of the county of Razès to William of Gellone. In his view, the scene on the stone depicts a Carolingian boar hunt.

One thought on “Knight’s Stone”