Painted by Nicolas Poussin between 1638 and 1640. Poussin is linked to the enigma of Rennes-le-Château like no other artist. According to Gérard de Sède in his book ‘le Trésor Maudit de Rennes-le-Château (1967)’, Bérenger Saunière bought a copy of ‘Les Bergers d’Arcadie’ (The Shepherds of Arcadia), in Paris some time around March 1892. De Sède however was prompted by Pierre Plantard and Les Dossiers Secrets both of which are under very strong suspicion with regard to the authenticity of what they said. Additionally it is uncertain Poussin ever visited the region. He might have on his travels from France to Italy. However Poussin did produce several works that appear to be linked to the history of Rennes-le-Château.

The Arcadian Shepherds (also known as Les bergers d’Arcadie or Et in Arcadia Ego) is without a doubt the most famous and most widely discussed of any of Poussin’s paintings. Poussin’s biographer Giovanni Pietro Bellori described the painting like this: “The third moral poetry is dedicated to the memory of Death among human prosperity. He faked a pastor of the joyful Arcadia, one knee on the ground, showing and reading a tomb’s inscription, where these words are inscribed: et in Arcadia ego. Thus the tomb is in Arcadia, and death comes amid bliss. Behind is a garlanded young man, leaning on the tomb and watching, attentive and meditating, and another one in front of him bows and shows the written words to a beautiful Nymph lightly dressed, who holds her hand on his shoulder and looks and retains her laugh, abandoning herself to the thought of death.”

This image depicts three shepherds and a monumental, statue-like woman grouped around a large stone tomb. The idyllic natural setting, the antique robes and sandals of the figures, and, of course, the painting’s title all situate this in the mythical realm of Arcadia.

Arcadia was a real region in Greece: isolated, surrounded by mountains, and sparsely populated by shepherds, already in antiquity the region was romanticized as a kind of terrestrial paradise, a place of unspoiled nature whose inhabitants still lived in the blissful harmony (and ignorance) of the Golden Age.

The myth of Arcadia has inspired poets and artists alike through the millennia notably the Roman poet Virgil whose Eclogues (a series of poems which take place in Arcadia) were one of the major inspirations for this painting.

In the midst of this paradise these shepherds look concerned. They are looking at a tomb with the inscription Et in Arcadia Ego. This Latin phrase roughly translates into English as “Even in Arcadia I exist,” referring to the contents of the tomb: death. These shepherds are discovering their own mortality. Poussin’s painting can be qualified as a memento mori; a reminder of death. Such pictures abounded during the Renaissance and Baroque periods and were particularly popular in Northern Europe.

Poussin’s The Arcadian Shepherds was commissioned in 1638 by Giulio Rospigliosi (the future Pope Clement IX) who had also commissioned Poussin’s other great masterpiece Dance to the Music of Time a few years earlier. The painting hung in is private appartments, it was never on public display. The next recorded owner is the Chevalier Henry Avice an avid art collector who would become Drawing Master for Louis XIV. In 1685 the Arcadian Shepherds was acquired by the Marquis of Louvois on the orders of Louis XIV for the interior of Versailles. He bought it through the art dealer Charles-Antoine Herault for the sum of 6,000 francs. The painting was part of a set of three, the other works being La Sainte Famille avec St Jean et Sainte Elisabeth dans un paysage and La Vierge et l’Enfant avec le petit saint Jean, sainte Élisabeth et saint Joseph adossé à un arbre. Ironically La Sainte Famille had been commissioned by Louis’ Finance Minister Nicolas Fouquet as a wedding present to his to be wife Marie-Madeleine de Castille. Fouquet would later fall from grace for outshining the King. The story is recounted in this excellent free ebook. Like Rospigliosi, the Sun King had the Shepherds of Arcadia on display in his private Petit Appartement. 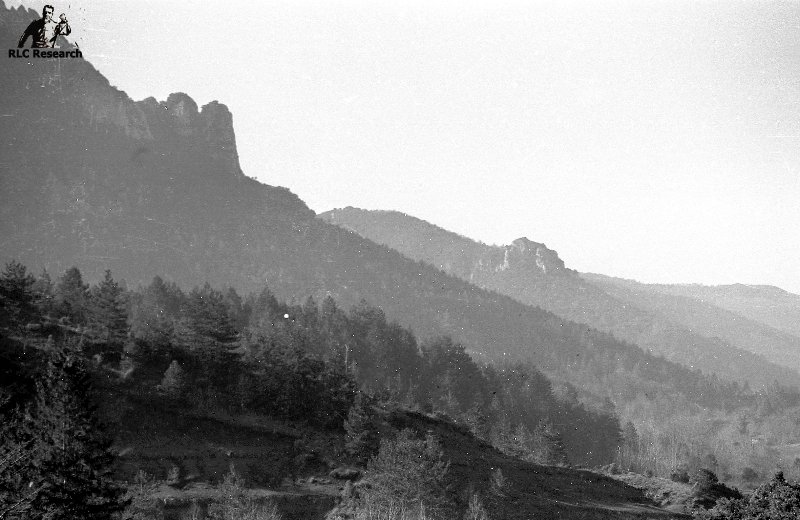 Cardou, Blanchefort and Rennes-le-Château as seen from Les Pontils

Henry Lincoln, Michael Baigent+ and Richard Leigh+ in their bestselling book Holy Blood, Holy Grail made the case that the painting displays a tomb that actually exists just outside Rennes-le-Château on the road to Arques at Les Pontils. The tomb, this that is no longer there indeed has an uncanny resemblance to the one on the painting. Whether or not it was there when Nicolas Poussin painted the scene is disputed. To the right of the tomb, the authors claimed, where the summit of Mount Cardou, the Château de Blanchefort and the hilltop of Rennes-le-Château. On the very left, the first top resembles the Château de Bézu. The big mountain top directly over the tomb is reminiscent of Bugrarach. 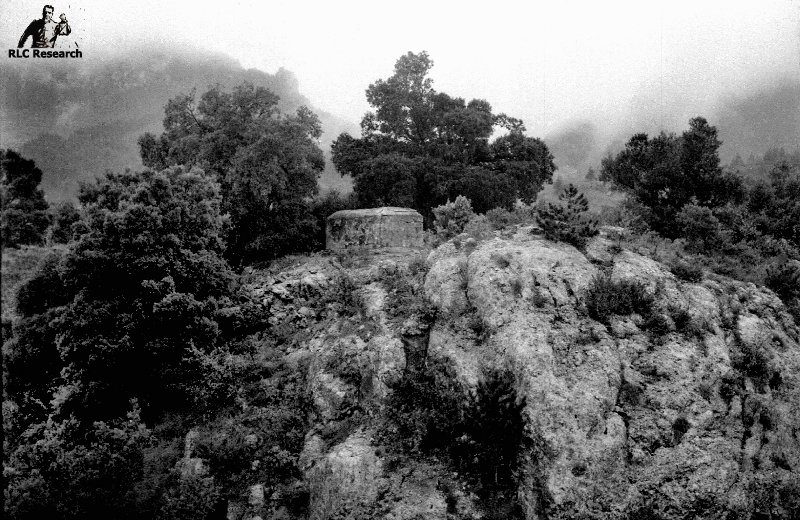 Henry Lincoln had the painting examined by Professor Christopher Cornford of the Royal College of Art who performed an expertise on Poussin’s techniques. Henry recounts why in this interview here.

“When I was looking with care at Poussin’s Sheppard’s of Arcadia, I found an anomaly in the painting when I came to Paris to look at the xrays. I decided that I wanted to look at the xrays and I found a small tiny, apparent anomaly, not visible on the painting itself but only visible on the xray, and it drew my attention to the Shepherd’s staff. Because on the xray you could see through the wreaths around the Shepherd’s head and you could see that the staff, the foreground detail, had been painted before the tomb, which is a background detail. 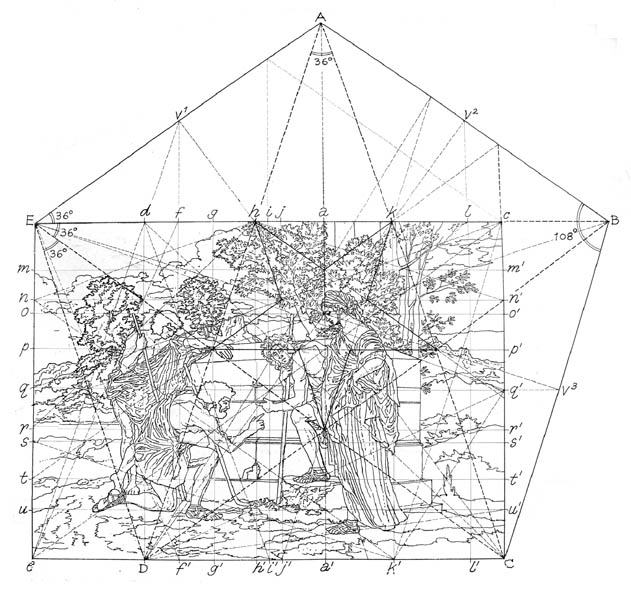 It seemed strange, that an artist would paint a foreground detail before he put in the background detail. So it just drew my attention to it. I need not say more than that, for when my attention is drawn to something, I look at it. And once I began to look at the Shepherd’s staff and wondered why he had painted it first, I discovered a geometry, which I was not expecting, and did not understand. So I thought we would need an expert and Professor Christopher Conford was teaching at the Royal College of Art and he had made the geometric analysis of paintings and had already done one by Poussin, so they asked if he would do a geometric analysis of Shepherd’s of Arcadia. I did not tell him what I found in order not to affect his thinking and he did the analysis and was totally staggered by what he found. It was out of Poussin’s period. Poussin should have not been using that sort of geometry.”

Cornford concluded that at the base of this painting is a pentagram. Lincoln discovered there is a pentagram (pentacle) in the surrounding landscape of which the Château de Blanchefort and Rennes-le-Château form 2 of the 5 corners together with the Templar Château of Bezu and themountain tops of Lauzet and Soulane. He concluded that the Templar castles in the area might have been built on their locations to mark the sacrednes of the area and to guard something hidden inside the geometry. He thought it was this secret Poussin coded into his most famous painting.

The Pentagram in the landscape discovered by Henry Lincoln:

Italian researcher Mariano Tomatis discovered something strange about the shadow of the arm of the pointing Shepherd.

This painting was actually the second one Poussin painted with this name. Have a look at the first one here.