In 1995, French researcher André Douzet discovered a topographical model of the Holy Places from the beginning of the 20th century. In an envelope, taped to the bottom of the model he found a number of letters and specifications, allegedly written by Bérenger Saunière to the model maker. In one letter Saunière talks about the specifications for the model. In a second letter that was recently published he talks about a second copy of the model intended for another priest in an unknown location. 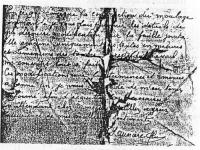 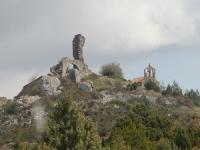 The Model illustrates the primary sites associated with the biblical Passion of Christ in Jerusalem, including the location of two notable tombs; that of Jesus Christ and his uncle, Joseph of Armathea. The model is a clay pre-production copy, intended to be made in brass. The correspondence suggests that the end product was never finished. Saunière died before it could be produced. Douzet suspected Saunière had wanted to leave a last clue. The topography didn’t match the sites in the Holy Land the model said to depict. For years he fruitlessly tried to place the model in the Rennes-le-Château region. It was only when he wanted to make a copy of the model for exposition at the Villa Bethania that he recognised a feature on the negative plastic mould: the Roc Redon, near the ruined village of Perillos.

The village of Perillos was once occupied by the Lords of Perillos, who counted among them the illustrous Ramon de Perillos, Grandmaster of the Order of the Knights of Malta. Perillos was part of the parish of Durban-Corbières. A number of familiar priests headed that parish. Both Antoine Gélis and Henri Boudet were once priest in Durban. Locals of the village remember Saunière visiting certain families and having an interest in their archives.

Today Perillos lies abandoned in one of the roughest and most barren landscapes in France. The closest inhabited place is Opoul-Perillos.

In search of what it could be Saunière had wanted to tell about Perillos, Douzet stumbled upon a notary register from the 1632, in which the royal notary Courtade described the transfer of land from Spain to France as a result of Mazarin’s Treaty of the Pyrenees. On one of its pages, it mentioned in a small paragraph a ground that contained a piece of land which, administratively, was untouchable, non-transmissible, on which it was forbidden to cut or collect wood, stones or remove anything else from it. Even the lords of Perillos were subject to this law. Furthermore, the land couldn’t be sold. It was a closed enclave, without access, within the grounds of the lords of Perillos. They had to guard it, but weren’t allowed to manage it. It didn’t belong to them and in no manner were they to intervene or make use of it. It has been documented that also Cassini had a more than average interest in the area. This hero of France, known for his famous Cassini-map did the first ever topographical survey of France. He spent almost 1½ years in Opoul, which is an extraordinary amount of time for a small territory, relative to

the rest of France that he had to map. He lived in modest conditions in Opoul, despite the fact that he normally lived in luxury. Despite all the time he spent there, he did not provide a detailed survey of Perillos. According to Douzet, he left the area where the tombs are empty on his Cassini map. Armed with the Courtade document and the model, Douzet claims he found the two tombs indicated on the model. He visited the tomb, described as ‘Tomb of Joseph of Arimathea’ and found some coins, nails and cups inside. He found the ‘Tomb of Christ’ sealed shut with a round stone of 2 metres in diameter.

In August 2008, a French researcher came forward with evidence that the claims proves that the two tombs are a hoax.

The landscape of Perillos is impressive regardless of any possibly hidden secret there. The plains are overlooked by the magnificent plateau of Opoul, that once housed a castle with a garisson and a small community. It’s not hard to imagine why anyone would hide a secret here. The area is ridden with caves and cravasses. It would take years to systematically search this piece of land. The history of Perillos and any possible links to the Mystery of Rennes-le-Château are investigated in incredible detail by Société Perillos, the research society of André Douzet and Philip Coppens.