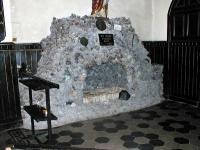 Jesus in the Tomb with his eyes opened, Eglise St. Michel. Espéraza

After Abbé Jean Rivière took the final confession of Bérenger Saunière, he is said never to have smiled again. This story seems exaggerated. Fact is that Rivière made a remarkable modification to his church in Espéraza in the period after Saunière’s death. He had a grotto built with a strange statue of Jesus lying down after the crucifixion (still wearing the Crown of Thorns). Jesus is lying in this tomb with his eyes open. What did Rivière want to tell us here?