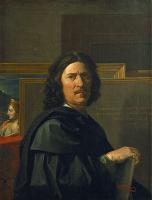 Allegedly, Poussin’s motto was ‘tenet confidentiam’ or ‘keeper of secrets’., What did Poussin know and did he leave any clues in his work?

Young Nicolas Poussin ran away from home when he was eighteen to find refuge in Paris in the Ateliers of Flemish masters Ferdinand Elle and Georges Lallemand. In 1624 he arrived in Rome, the city he had always wanted to work in because of his love for the Italian masters. By that time he had an impressive command of the Latin language and classical literature which didn’t go unnoticed. Cardinal Francesco Barberini became his patron and master. He worked on one of the chapels St. Peter’s Basilica and painted various other works across Rome. Among his later patrons were splendid names like French Cardinal Richelieu and Cassiano dal Pozzo for whom he produced his magnificent first series of the Seven Sacraments.

Both, Series of, Seven Sacraments by Nicolas Poussin

In 1656 while living in Rome, Poussin received a visit from the Abbé Louis Fouquet, the brother of Nicolas Fouquet, superintendent of finances to King Louis XIV of France. From here the Abbé sent a letter to his brother describing his meeting with Poussin. In this letter he makes the following statement:

‘He and I discussed certain things, which I shall with ease be able to explan to you in detail – things that will give you, through Monsieur Poussin, advantages which even kings would have great pains to draw from him, and which, according to him, it is possible that nobody else will ever be able to rediscover in the centuries to come. And, what is more, these are things so difficult to discover that nothing now on this earth can prove of better fortune nor be their equal.’

Some of the most important influences in the development of Poussin’s style were not paintings or sculptures, but poems, plays, theories and ideas. Poussin was a devote scholar and possessed an impressive library; his biographers describe the artist as leading a quiet life of study and contemplation. Ancient music theory, the science of optics, the philosophy of the Stoics all had an important influence on Poussin’s theory of painting, and on his choice of subject and style.

Poussin obsessively planned every element of his style, from contour lines to colors, often using ancient art and philosophy as his inspiration; the amount of thinking and theory that informs Poussin’s paintings is truly impressive.

Nicolas Poussin died in 1665 in Rome where he was buried in the Basilica San Lorenzo in Lucina. Châteaubriand, French Ambassador in Rome, raised a monument to Poussin above the artist’s mausoleum in 1820. It carries a dedication and a bas-relief displaying his most famous painting The Shepherds of Arcadia., At the bottom, there’s an inscription that perhaps answers the question, whether Poussin preserved esoteric clues in his work. It states:

This curious expression speaks about how Poussin has given his life without really dying. He is silent now but if you’re prepared to listen you can hear him speaking through his paintings.