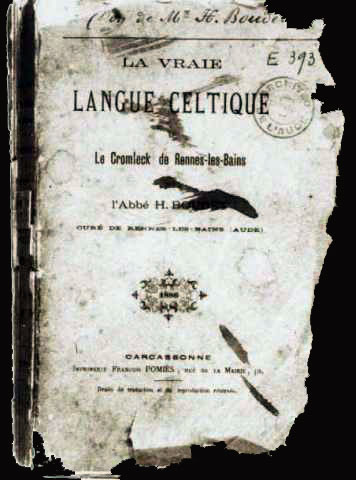 For the first time, this book is available to the English language audience. Marcus Williamson presents you The True Celtic Language and the Stone Circle of Rennes-les-Bains.

In 1880, Abbé Henri Boudet of Rennes-les-Bains published a strange book. La Vraie Langue Celtique et le Cromleck de Rennes-les-Bains (The True Celtic Language and the Cromleck of Rennes-les-Bains) was half a language study, half a description of the immediate surroundings of the village. In short, in the book Boudet makes the case that the names of villages, mountains, valleys etc. can be traced back to an old celtic language which he tries to prove by taking them apart to phonetically relate them to modern English. Mount Cardou for example is taken apart into to cart and how. According to Boudet, those two words depict exactly what the Celts must have thought when they first saw the mountain: how are we going to get across that with a cart?. Apart from these wordgames, the book is littered with Biblical references, numbers and long lists of words. Even in his own age, the book was met with surprise and criticism. It wasn’t considered a serious study of languages and people didn’t know what to make of Boudet’s references to the Celts.

Boudet knew the area around Rennes-les-Bains extremely well. He spent much time walking every inch of the hills surrounding the village. Sometimes he would be seen leaving the village with a large ladder on his back.

According to Boudet a giant Cromleck lay around Rennes-les-Bains. A Cromleck was a circle created by the Celts, delimited by menhirs and strange stones like the Trembling Rocks. Boudet claimed in his book that the first Christian missionaries in the area had changed this Pagan place of worship into a Christian temple by engraving crosses in most of the monoliths many of which can still be seen today. They crowned this now become Christian temple by a statue of Christ on the Cap de l’Homme.

The first 500 books were printed in 1880. Boudet paid for them himself and gave most away. As a printer he used François Pomie who was the house printer to the Bishop of Carcassonne. According to some sourced Boudet spent the next 6 years making amendments to his book, to have another 500 copies printed in 1886. He paid 5.382 Goldfrancs for the printing which was a very considerable amount at the time if you consider that a priest made approximately 900 Goldfrancs per year. It appears that only 98 books were sold, while some 100 copies were sent to libraries and royal courts all over Europe. Many recipients returned notes to Boudet thanking him for his work like Queen Victoria who responded by the hand of her secretary Sir Henry Ponsonby,  from Biarritz on 29th March 1889:

“Sir Henry Ponsonby presents his compliments to Monsieur Cailhol and is commanded by the Queen Victoria to request him to thank the Reverend Pere Boudet for the interesting work on Languedoc and English which he has had the kindness to present to Her Majesty.”

Richard Andrews found a copy with an accompanying letter back in a university library in Oxford during the research for his book the Tomb of God. Boudet certainly acted as if he wanted to secure that his book would survive in a place where it would be well looked after.

According to a local tale, Boudet burnt the remaining 102 copies of his book early 1914. Some say by order of Bishop de Beauséjour but that is impossible to confirm. A couple of weeks later he retreated from the priesthood and moved to Axat to live in his parental home. He died one year later to be buried in the family tomb with his brother, the notary Edmond Boudet who had died in May 1907 at the age of 67. 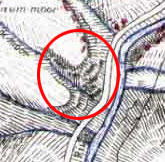 The book was illustrated by that same brother Edmond. He produced some drawings in a typical clear hand and a large map of Celtic Rennes to show the reader the locations of the book around Rennes-les-Bains. The map drawn by Edmond is an enigma in itself. It contains the face of a devil and many other peculiarities for those who know the area well.

The unusual content of the book and the suggestion that it needed to be preserved have led to an army of researchers dissecting every syllable of the book in their attempts to break the Boudet-code. La Vraie Langue Celtique is considered by most researchers to be the central piece of the Saunière puzzle. French researcher Franck Daffos claims that Henri Boudet’s book describes the locations of two hiding places in which the treasures of the Temple of Jerusalem were hidden by the Templars. Saunière’s church was subsequently altered to reflect what was described in the book because it was too difficult to decipher. According to Daffos, Saunière’s church is the comic book version of La Vraie Langue Celtique. 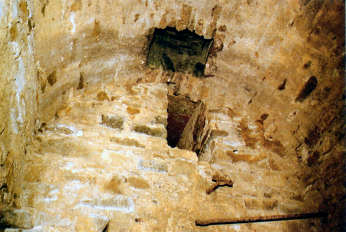 The late Flemish author and researcher Jos Bertaulet published a book in 1991, putting forward the theory that Boudet had hidden a phonetical code in La Vraie Langue Celtique. In his book The lost King and the Sources of the Grail Legends, Bertaulet deciphered the Boudet-code which led him to the sanctuary of Notre-Dame de Marceille where he discovered a secret vault along the bank of the river. This vault features prominently in the works of some contemporary French and Dutch researchers who, amongst other things, claim that is was once the hiding place of the Ark of the Covenant or the Arma Christi.

One thought on “The True Celtic Language”