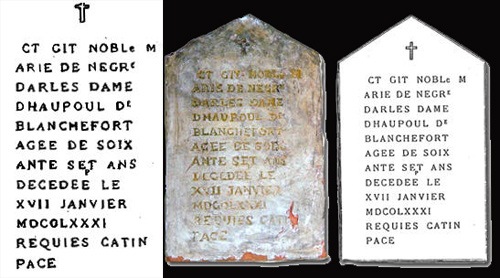 the vertical headstone of Marie de Nègre d’Ables as recorded by M. Elie Tisseyre in 1905 (left) a reproduction from the Museum in Rennes-le-Château (middle) and a commonly used interpretation in many books (right)

Until some 10 years ago there was considerable doubt as to the authenticity of the stone since the available images only existed in the very suspicious Dossiers Secrets. However, French researcher Jean-Pierre Monteils then discovered the original drawing of the stone by La Société d’Etudes Scientifiques from 1905. Paul Saussez confirmed the find some years later. According to them the words PS and Praecum where inscribed on the top sides of the stone. Nor Pierre Plantard, nor Gerard de Sède ever mentioned this. This gives a whole lot more credibility to the authenticity of the existence and inscription in not only this stone but also the Dalle the Coumesourde.

It was with all probability Antoine Bigou who made Marie de Nègre’s tomb or at least designed and commissioned it to a local stone carver. The story goes that Bigou put clues in both the horizontal and the vertical tombstone. Clues to perhaps a material treasure originating perhaps in the many treasure legends that roam the countryside. Maybe clues to an immaterial secret. Maybe clues to a combination of both for wasn’t it said in the village that Saunière had recovered a crown?

From 1892, shortly after he had made his alleged discoveries, Saunière started to display an unnatural appetite for his cemetry, even for a priest. Several villagers testified they saw him rummage around the churchyard at night, accompanied by his young maid Marie Dénarnaud and a shovel. Obviously the villagers weren’t very impressed by there priest desecrating the graves of their loved ones. They filed various complaints, resulting in two official warnings for Saunière by the community council and the prefect. Saunière’s defense was that he worked on a new lay-out of the cemetery and that he had to clear out old graves. That would have been perfectly normal, if it weren’t for the fact that he did it without consulting anyone and in the dead of night. What adds to the mystery is that he had a wall built and an iron gate installed from his own money. It seems apparent he wanted at least control over the cemetery access, if not conceal whatever it was he was doing.

a villager secretly observes the priest and his maid digging up a grave excellently depicted by Michel Marrot, copyright Michel Marrot and Antione Captier

Saunière must have noticed the tomb of Marie de Nègre in the cemetery. Either by following the clues he found from Antoine Bigou or simply beacuse he spent enormous amounts of time in his cemetery. The story goes that he deciphered the stones and defaced them subsequently with a hammer and chisel; a painstaking job. Whatever the chain of events has been, Saunière can’t have been in a hurry. Supposedly he did all his discoveries before 1892. Yet as late as 1905 the tombstone was there for all to see as is attested by the report of M. Elie Tisseyre who examined and described the stone on 25th June of that year.

Tisseyre was heading a group of local historians and scientists, counting among them such notables as the Mayor of Alet-les-Bains. In his report Tisseyre described the situation: “A visit to the cemetery enabled us to discover, in a corner, a wide tombstone, broken in the middle, on which one could read a very crudely engraved inscription. ‘Here lies the noble Marie de Nègre D’Arles, La Dame d’Hautpoul de Blanchefort, aged sixty-seven, died 17 January 1781, May she rest in peace’ This tombstone measured 1.30 metres by 0.65 metres.” The text was accompanied by a drawing of the stone. How scientifically interested the members of the excursion really were is quite clear from the rest of the text:,  “But then someone came to remind us that it was time for lunch, which was served in one of the rooms of the Castle. The meal was certainly of the better standard. An excellent mocha rounded off the festivities and the first part of our programme. We thanked M. Auguste Fons for his hospitality and, at the suggestion of M. Fages, elected him a member of the Society to a round of applause.”

What the report doesn’t say is how and by whom this group was admitted to the cemetery. Like today, no-one could get in or out without the keys and Bérenger Saunière and Marie Dénarnaud were the kept them.

Given the fact that Saunière more or less completed his re-shuffling of the cemetery in 1895 and M. Tisseyre didn’t arrive for another 10 years, the conclusion could be drawn that Marie de Nègre’s vertical headstone (or stèle as the French call it) had been standing idle in a corner for at least 10 years when the excursion arrived.

At present, the bulletins of the illustrous ‘Société d’Ã‰tudes Scientifiques de l’Aude‘ are kept in the Bibliothèque National in Paris. You can go see them for yourself on the Tobiac location Rez-de-Jardin (stockhouse, shelf 8-S-6742, years 1890 – 1978). You’ll be looking for ‘unit 8’, containing Tome 17 (no kidding).

The stone is no longer there so we can’t check the inscription ourselves anymore. From the transcription of Tisseyre however, one gets a pretty good idea what we’re talking about. A generation of researchers has meticulously studied these letters and has reported an alleged relation to what is known as the Grand Parchment. By a notoriously difficult way of decryption, using the keyword found on this very tombstone (apperently MORTEPEE), the Grand Parchment releases it’s famous message:

We always thought it was rather an elaborate way of hiding a secret even if Antoine Bigou had more than 10 years to code it. Moreover, the result of the exercise is far from helpful. No-one to this day has got anywhere or found anything with these three crazy phrases. Some time ago, Alan Scott has drawn up a good explanation of the ‘MORTEPEE’ theory. You can read it here.

A tantalizing anagram can be made from the inscription on the stone:

Saunière apparently went to great lengths to erase the entire face of the stone.